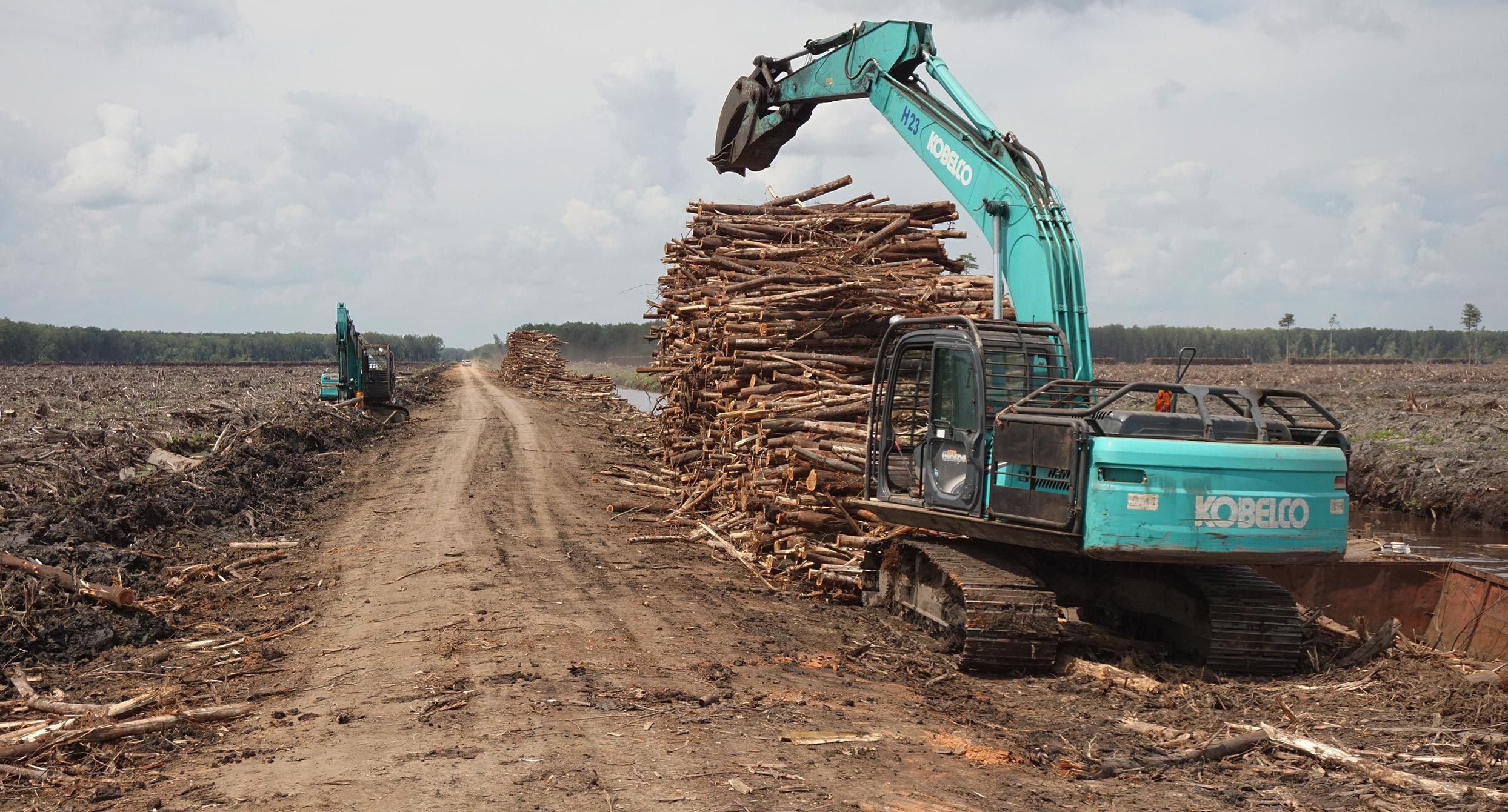 Indonesia pulp sector’s progress on deforestation hangs in the balance

Despite declining rates of deforestation, past clearing and future supply risks pose ongoing challenges for the Indonesian pulp sector’s sustainability

Among all the commodities tracked by Trase, Indonesian pulp is the only one that is completely covered by zero-deforestation commitments adopted by exporters. Given the sector’s past role in driving widespread deforestation, successful implementation of these commitments would stand out as a remarkable environmental achievement.

The three corporate groups – Sinar Mas , Royal Golden Eagle (RGE) and Marubeni – which control all six of Indonesia’s active pulp mills have made public commitments to end deforestation in their supply chains. While these zero-deforestation commitments have generated much optimism in sustainability circles, Indonesia’s two largest producers – Asia Pulp & Paper (APP; a subsidiary of Sinar Mas) and APRIL (a subsidiary of RGE) – have both been linked to pulpwood concessions with deforestation after their commitments took effect in 2013 and 2015, respectively. For example, one recent investigation documented that both APP and APRIL had purchased wood from a concession that had cleared almost 200km2 of natural forests during 2013-2017.

By integrating detailed data on the Indonesian pulp industry, Trase highlights progress made in the sector, as well as continuing challenges that must be overcome to end pulp-driven deforestation in Indonesia.

Since the early-1990s, Indonesia’s pulp industry has developed over 2 million hectares (ha) of wood fibre plantations to supply the country’s pulp mills. The vast majority of this expansion occurred through clearing degraded primary forests, much of which was located on peatlands. As a result, the industry was a leading driver of deforestation through the early-2010s. During this period, Indonesia’s major pulp producers relied heavily on “mixed tropical hardwoods” (MTH) obtained from natural forests in their consumption of wood fibre.

The past decade has seen a dramatic decline in annual deforestation occurring inside Indonesia’s pulpwood concessions (Figure 1). Over the three years before 2013, when Asia Pulp & Paper made its current zero-deforestation commitment, deforestation averaged 140,000 ha per year in the areas now managed as part of the 91 wood fiber concessions that have supplied the pulp industry between 2015 and 2019. In contrast, over the three-year period 2017-2019, only 21,000 ha per year were cleared inside these same concessions. This 85% reduction in deforestation demonstrates remarkable progress in the sector.

Despite the sector’s recent progress in reducing deforestation, current pulp exports are inextricably linked to historical deforestation undertaken to establish extensive pulpwood plantations. Pulp exported in 2019 would have been produced using pulpwood from a plantation that was established in 2014 or earlier.

To depict the amount of recent deforestation associated with present-day trade in pulp, Trase calculates the “deforestation for wood pulp” – the annual average area of deforestation that occurred on pulpwood plantation areas (a subset of the gross concession area) over a ten-year allocation period ranging 6-16 years prior to a pulpwood harvest. This ten-year allocation period is equivalent to two five-year rotations of *Acacia* or *Eucalyptus*, the main pulpwood species used in Indonesia.

In 2019, RGE sold pulp with the highest intensity of deforestation for wood pulp (12.45 ha per 1,000 tonnes of pulp produced), followed by Sinar Mas (5.75 ha / 1,000 tonnes) and Marubeni (1.92 ha / 1,000 tonnes). These statistics should be viewed as conservative estimates of the historical, environmental impact of Indonesia’s pulp industry for multiple reasons. First, the calculations do not include the widespread deforestation that occurred inside present-day concessions prior to the year 2000. In addition, these statistics do not include the 26% percent of deforestation occurring inside pulpwood concessions that fell outside the footprint of future pulpwood plantations. Although these areas have not yet been converted to pulpwood plantations, the wood harvested from the clearing of natural forests on these sites may have been used to produce pulp.

Will the Indonesian pulp industry’s efforts to end deforestation last? The industry continues to expand, ramping up its demand for wood and the land needed to grow it. Wood consumption jumped by nearly a third between 2015 and 2019, mostly due to the 2016 opening of the OKI mill in South Sumatra, which expanded the sector’s domestic processing capacity by 38% (Fig. 4).

Most of this new mill´s plantation base is on peatlands that have seen recurring fires, reflecting a pattern across the wider industry where more than 40% of plantations have been developed on drained peatlands. Leading peat scientists predict that these plantations will steadily become less productive or even unviable. In addition, pulp companies have committed to reducing their reliance on peatlands. Consequently, the industry will need to shift a significant portion of its plantation base elsewhere.

These drivers raise concerns over future deforestation risk in the industry – particularly in Kalimantan, Papua, and some smaller islands in Indonesia, where expansive tracts of rainforest remain. Fully implementing the commitments made by the pulp sector will be critical for continuing the reductions in deforestation seen in recent years.