Trase assesses the pros and cons of recent moves into green finance by commodity traders.

Traders in Indonesian palm oil and Brazilian beef and soy have stepped relatively gingerly into the otherwise ballooning ‘green finance’ space – understandably so, given the sector’s dominant role in driving deforestation .

Nonetheless, for the major traders in these commodities, sustainability-associated finance instruments still amount to some $11bn since 2017 (see figure). There have even been some recent moves beyond revolving credit facilities into fully-fledged green bonds and term loans , as illustrated by the announcement in November by JBS on the successful issuance of its sustainability-linked bond . 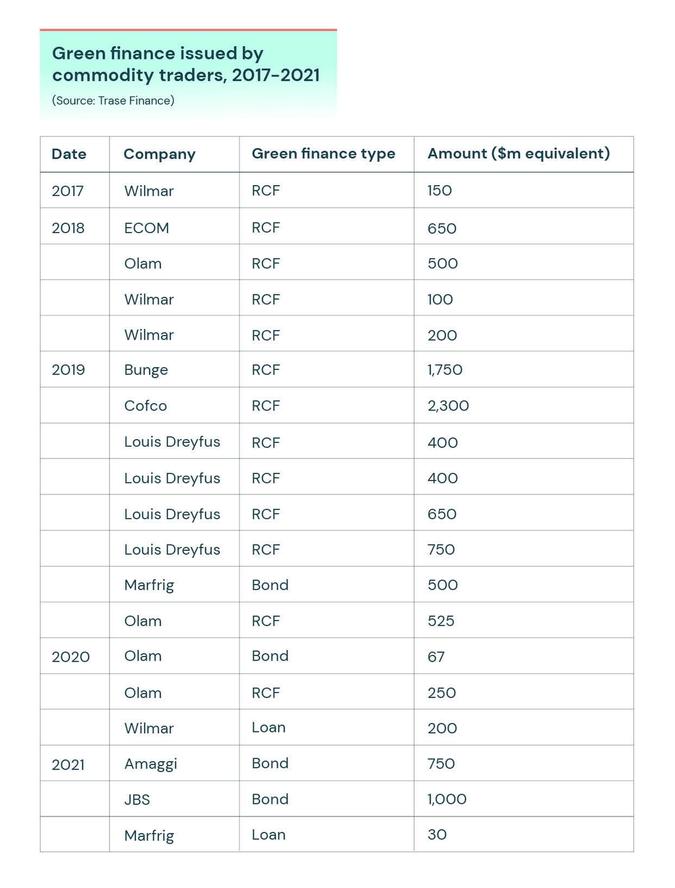 Trase has assessed the pros and cons of some of these products using data from the Trase Finance platform, which links financing of the commodity trade to deforestation risk in producer countries, in order to highlight the need for improvement. The assessment yields the following insights:

Trase Finance demonstrates how opaque corporate structures can be a big challenge in the green finance space.

Take Amaggi’s green bond. The company’s deforestation risk exposure may appear to be low compared to its peers, but that fails to give adequate consideration to its joint partnership in Amaggi Louis Dreyfus Zen Noh (ALZ), which has the second highest deforestation risk exposure for Brazil soy in 2018 at almost 7,500 hectares (ha) due to its heavy sourcing from the Matopiba region (see figure).

When considering eligibility and performance, investors need to take in the wider company-risk profile, not just specifically who and what a bond claims to fund.

Greenwashing is a problem

Marfrig’s sustainability transition bond funds the “acquisition of cattle produced in the Amazon biome only from suppliers that respect our environmental criteria”.

Linking funds to more sustainable suppliers may seem positive. However, it allows a large trader to artificially divide up its supply chain, protecting its credit rating from its less sustainable commodity purchases and insulating its access to green finance from its wider deforestation risk.

For large traders that already have good access to affordable finance, it allows them the ‘kudos’ of green issuance and of being active in the ESG space, but provides little or no incentive to make improvements to the most damaging parts of their operations and supply chains – in this case, Marfrig’s sourcing from the Cerrado. Companies need to address risks in their whole supply chain to avoid charges of greenwashing.

For the investor, it gives too much of a ‘free lunch’ on its due diligence and ESG compliance and provides too flattering a picture of the embedded deforestation risk in its portfolio. Being a driving force for positive change should be a minimum requirement of green finance products.

Green funding too often lacks ‘materiality’ – that is, relevance to the company’s most critical ESG risk. For example, JBS says its $1bn sustainability-linked bond demonstrates its “commitment to reduce our environmental impact and become a net-zero company by 2040, the most ambitious sustainability pledge in our sector.”

However, JBS’s key performance indicator for achieving this bond is limited to reductions in its scope 1 and 2 operational emissions, such as on-site energy use, and does not include its scope 3 supply chain emissions, which include deforestation and cattle farming, despite the company’s acknowledgment that these account for the majority of its climate impact.

In 2016 and 2017, JBS Brazil’s scope 1 and 2 emissions totalled just over 1 million tonnes of carbon (CO₂e). Data from Trase shows that in these two years JBS Brazil was exposed to nearly 30 million tonnes CO₂e from deforestation risk associated with its beef exports.

Wilmar says its revolving credit facilities come with a package of ESG indicators, “suitable for companies who are at different stages of their sustainability journey as it can be customised according to their requirements”. This less demanding, ‘pick and mix’ approach to sustainability invites considerable scepticism, especially when offered by an Indonesian palm oil trader with the third largest deforestation risk in 2015, according to the most recent data from Trase. Last year, forest-monitoring groups raised the alarm over deforestation in a palm oil concession managed by a supplier to Wilmar in Papua, Indonesia.

Lack of meaningful rewards or penalties

Bunge has the largest deforestation risk of any trader linked to Brazilian soy at 11,197 ha based on 2018 Trase data. In 2019 it issued a three-year sustainability-linked revolving credit facility – a ‘general use’ facility with no restrictions on the use of proceeds, but with costs linked to key performance indicators (KPIs).

For each KPI achieved, its interest rate is reduced by 0.5bp (half of 100th of a percent), while +0.5bp is added for each penalty level hit. These numbers are pretty inconsequential, not least when one considers that those rates themselves had plunged 250bp since late 2018 and by 575bps since before the financial crisis.

Even if financiers choose to ignore Bunge’s huge deforestation risk, this green product provides little incentive for Bunge to improve its sustainability performance.

A greener shade of bond

It is not all bad news though. We may criticise the incentive structure, but at least the Bunge product is an acknowledgement of the importance of traceability and it results in higher visibility reporting on it. The same can be said of other sales too.

Although the quality of the policy commitments made by Cofco, China’s state-owned commodity trader, is poorly rated by Trase Finance (using data Forest 500 data) for its $2.1bn credit facility – the largest yet in the sector – it does at least also come with a condition of increasing traceability of agri-commodities with a focus on directly sourced soy in Brazil, assessed annually by an independent inspector.

Looking forward, regulatory change also offers glimmers of hope. The EU and UK taxonomy aim to define a common classification system for sustainable economic activities to address greenwashing and we are likely to see more labelling schemes emerge that certify bonds and loans as deforestation free as has been seen in climate finance.

The example highlights that even if green finance is unimportant to commodity traders themselves, its importance to their customers can still generate downstream impact both in terms of sales and reputational effect.

Green finance is essential to support the development of sustainable business models, including deforestation-free commodity production. Trase Finance is being developed to try to help banks and investors design robust and credible green financial products, for example by benchmarking high-risk suppliers to inform exclusion bonds or setting KPIs in sustainability-linked loans. Trase welcomes feedback and engagement from financial institutions interested in developing such products.