The leading direct driver of deforestation in Latin America

The Brazilian cattle sector is the leading driver of tropical deforestation. However, pasture deforestation is highly concentrated in a few municipalities.

of pasture deforestation in 2017

The Brazilian cattle sector is the leading driver of tropical deforestation

worldwide, and is estimated to account for a fifth of all commodity-related deforestation

across the tropics . Trase estimates that pasture deforestation in the Brazilian Amazon 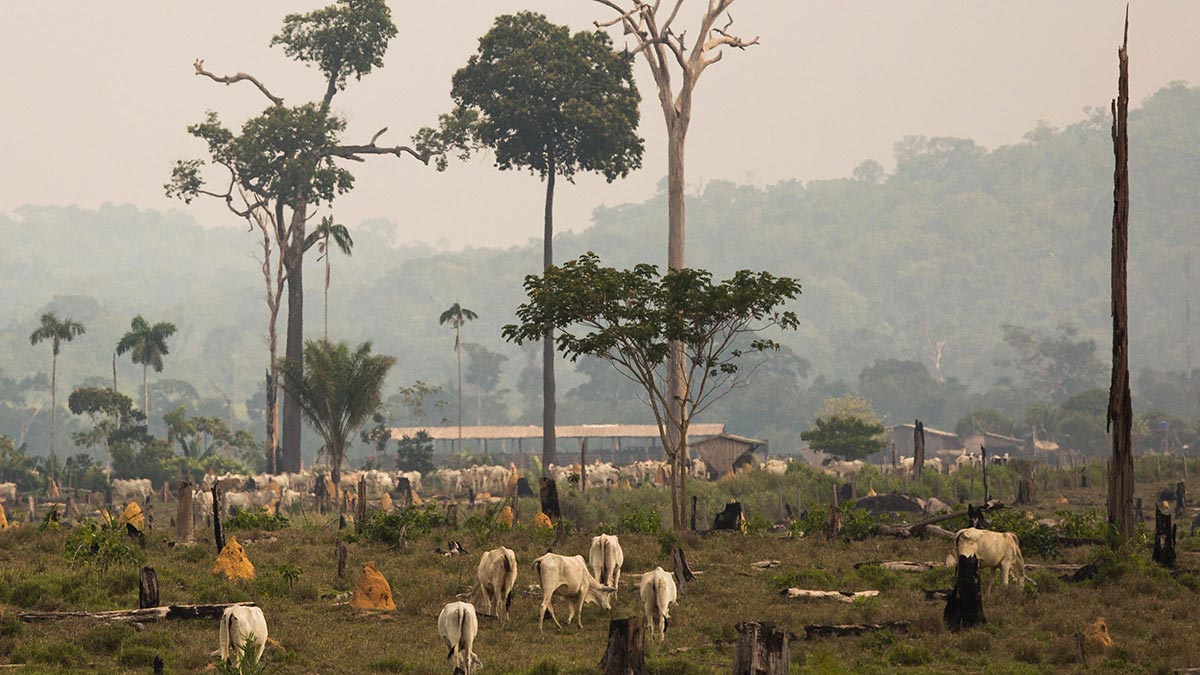 of cattle deforestation risk per 1,000 tonnes of beef exports in 2017

Brazil’s 2.5 million cattle farmers are distributed across the country, and around 90% of cattle are raised on pasture for their whole lifespan, in contrast to the more intensive, feedlot-based systems seen in the US. This means that any increases in production tend to come through the expansion of pasture area.

It is important to note that that the expansion of cattle pasture onto native vegetation in Brazil is closely related to the expansion of soy, Brazil's main agricultural crop. It typically takes between three and five years (depending on the region) before the first soy crop is planted on newly cleared land. In the meantime the land is often used as pasture. Unpublished analyses by the Trase team strongly indicate that soy expansion is an indirect driver of pasture deforestation. 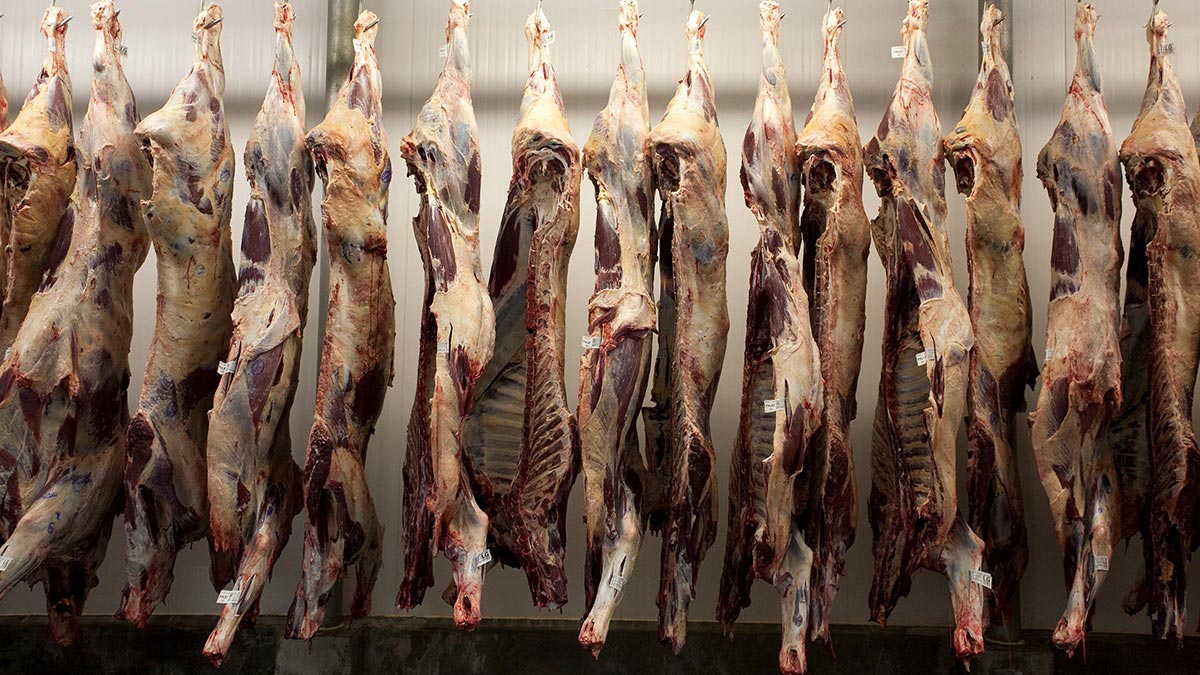 Mainland China and Hong Kong were by far the biggest export markets for Brazilian beef products in 2017, together importing 767,000 tonnes. Hong Kong was the top importer throughout 2015–2017, but mainland China’s imports more than doubled in the period, from 136,000 to 309,000 t, taking it from the seventh largest to the second largest individual market. Over the same period, exports to the other top international markets – Egypt, Russia, the EU and Iran – all declined. The increase in China’s imports of Brazilian beef is set to continue in the wake of the African swine fever outbreak that began in 2018, which has decimated its domestic meat production, requiring the culling of more than half of China’s pig herd, with knock-on effects on prices and imports for all meat products.

– JBS, Minerva and Marfrig, and their subsidiaries – handled 68% of Brazil’s beef exports in 2017 out of 135 exporters in total. These companies tend to have strong control over the origin of their products, as most operate their own slaughterhouses.

More than half of the deforestation risk

linked to exports is associated with just 2% of cattle-producing municipalities.

However, exports to Hong Kong carried almost twice as much deforestation risk

(64 ha/kt) compared to mainland China (36 ha/kt) because it accepts imports from all slaughterhouses licensed for export by the Brazilian federal government – whereas mainland China licenses a much smaller set of facilities, mainly in southeastern Brazil and far from deforestation frontiers. The European Union’s deforestation risk exposure was mainly linked to cattle sourced from the Cerrado savannah region: 2,788 ha, or 57% of the EU’s total exposure.

In turn, sourcing patterns, and the related deforestation risk, are influenced significantly by the beef products being exported. For example, live cattle exports are mainly sourced from Pará state and are associated with nearly five times more deforestation risk per tonne than other beef products the country exports (fresh and processed beef, and offal). Also important are importing countries’ restrictions and permissions concerning beef products from particular states or slaughterhouses, as in the case of mainland China and Hong Kong.

Exports of Brazilian beef (as well as chicken and pork) have risen significantly in recent years. Brazilian beef exports grew fivefold between 2000 and 2019. The cattle needed to meet this rising demand increasingly comes from regions where pasture expansion is driving higher levels of deforestation – regions that until now have typically supplied the domestic market. As beef exports continue to grow, the associated deforestation risk can also be expected to rise, as seen, for example, in the recent licensing of risk-exposed slaughterhouses by mainland China or the lifting of the US ban on fresh beef imports from Brazil. The COVID-19 pandemic looks set to accelerate exports to the USA. 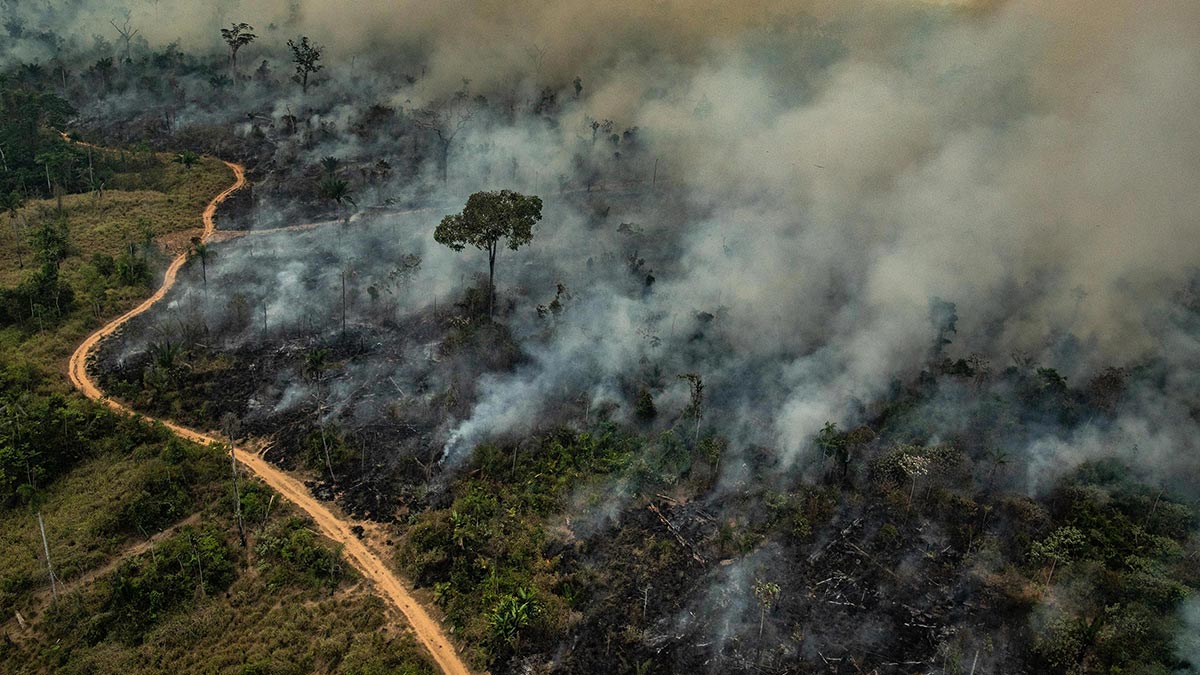 (55 out of 2,803) of cattle-producing municipalities accounted for at least half of cattle deforestation risk in 2017

Two main types of ZDC cover beef production in the Brazilian Amazon. Terms of adjustment of conduct (TACs) are legally binding commitments signed by individual slaughterhouses to not purchase cattle from properties with illegal deforestation within the Legal Amazon

(which includes part of the Cerrado). The other type, G4, is an agreement by traders JBS, Minerva and Marfrig not to purchase cattle from properties in the Amazon biome that include land cleared after 2009. TACs and the G4 agreement covered 82% and 67% of exports from the Amazon biome, respectively, in 2017.