Argentina plays a vitally important role at the heart of South America’s agricultural supply chains. As a key producer of beef, maize and soy, the country’s agricultural production has been expanding northwards into the Gran Chaco ecoregion with close to 100,000 km2 of woodlands lost within Argentina since 1985 . The country also hosts a processing industry with the capacity to crush 62 million tonnes of soybeans annually into soy cake (or meal) and oil which is exported for feed, cooking oils and biodiesel.

These processing capabilities together with the country’s location downriver of other key soy producers (Brazil, Paraguay, Bolivia) present Argentina as a unique case of indirect sourcing of forest-risk commodities which remains a blind spot for the world market. Yet, while Argentina’s position creates a challenge for tracing sources of soy across borders and within Argentina, systems are already in place that could bring more transparency to the soy supply chain.

In Argentina, soybeans are typically exported from the Province of Buenos Aires through Necochea (Quequén), Bahia Blanca and upstream of Buenos Aires. Crushed products are exported from ports in and around Rosario (Santa Fe Province) where traders have their own terminals to store, crush and export soy products. The ‘Hidrovía Paraná/Paraguay’ (or Paraná/Paraguay River Hydroway) serves as a key river transport connection for imports and exports to and from Argentina’s main soy crushing centre in Rosario. This river network extends beyond Paraguay, north into the Pantanal towards the port of Cáceres (Southern Mato Grosso, Brazil, following the Paraguay river), Northwest into Southern Brazil’s Atlantic Forest (following the Paraná river), and South towards the Atlantic Ocean. 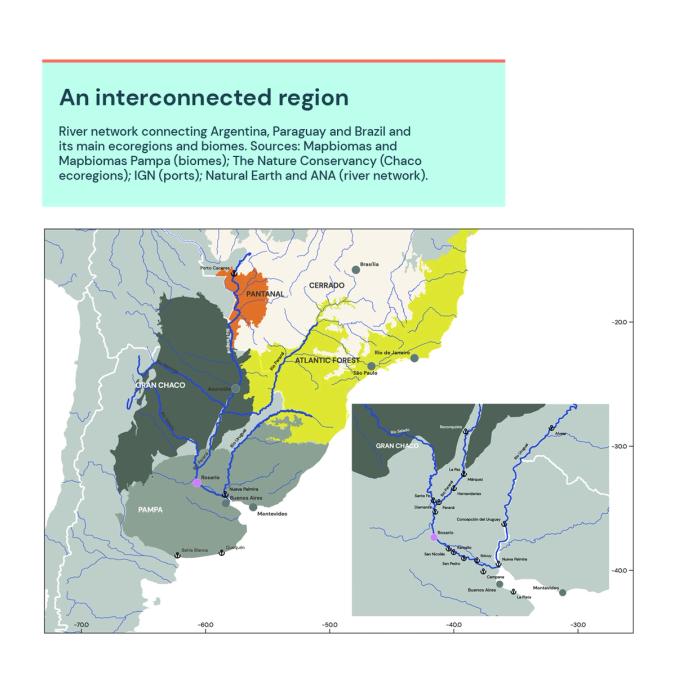 These river networks therefore connect main soy producing regions and the biomes and ecoregions that have experienced deforestation in recent decades. The region is also subject to climate risks that affect the regional water cycle with knock-on effects on both agricultural production and logistics. Soybeans in South America are rainfed and therefore yields can be affected by drought such as in Argentina in 2018 and more recently in Paraguay . At the same time, river levels have become critical in recent years , thereby affecting costs of grain movement within the region, particularly in and out of Rosario.

Less than 70% of Argentina’s crushing capacity was used annually between 2015 and 2019, and was down to 57% in 2020 ( Bolsa de Cereales 2020 ). Soy imports are therefore key to increasing the quantity of Argentina’s output of crushed products. It also improves its quality as soy produced in Paraguay has greater protein content.

However, these international sources of soy are associated with different impacts that remain unaccounted for in the export of soy cake and meal to the world market. Argentina’s imports of Paraguayan soy were associated with 2,300 ha of deforestation in the Atlantic Forest in 2019 (see figure below). Tracking such an impact through crushed soy products remains a challenge as soybeans are typically aggregated and mixed at both ports and crushing facilities.

We attribute almost 6% of all exports between 2015 and 2019 as being sourced from the Chaco ecoregion (both the Humid and Dry Chaco). These results rely exclusively on intra-national trade information available in Sio-granos , a dataset that shows annual grain movements within Argentina and which is used in the Trase method to link departments of production with ports of export.

In its public form, the Sio-granos data is aggregated such that destinations are only represented by their zones (each zone being made up of several departments). Soybeans could be moved from zone to zone several times before reaching a crushing facility, so that the link with the Chaco is lost in the data. For instance, the region of Rosario receives soybeans from zones located in the provinces of Córdoba and Santa Fe, but these centres themselves receive soybeans from provinces within the Chaco ecoregion, such as Santiago del Estero.

The departments that accounted for 95% of soy deforestation between 2015 and 2019 represented only 10% of total soy produced and 4% of exports in the same period. Trader and country supply chains linked to the Chaco and to these departments where most soy deforestation is concentrated are therefore at risk of being associated with environmental impacts. Traders continue to increase coverage of zero-deforestation commitments (ZDC) with 55% of soy volume exported in 2019 covered by a trader with a ZDC (up from 30% in 2016).

Opportunities for transparency in the soy supply chain

A narrow focus on the direct supply of Argentinian soy could prevent a system-wide change towards deforestation-free supply chains in the region. Such a focus could actually increase deforestation through indirect supplies, particularly considering new agricultural frontiers for soybean production such as the Paraguayan Chaco.

The soy supply chain is complex, but information already exists to help with traceability of Argentina’s sources of soybeans. The Sio-granos data is likely to be already available in a disaggregated form and could help elucidate links between places of production and crushing facilities (including those not located at ports). This data also has the advantage of including other commodities known to be associated with deforestation, such as maize and beef whose intra-national movements are tracked in Sio-granos and Sio-carnes .

Disclosures of international suppliers for crushers in Argentina would increase visibility of exposure to deforestation in Paraguay, particularly given that the same companies often operate up and downriver. Additional confidence could also come from soy certification schemes, but volumes remain low. For instance, less than 1% of Paraguayan soy was certified by the Round Table on Responsible Soy Association in 2019.

Within the context of upcoming due diligence legislation in the EU , UK and US , some companies are already mapping their indirect supply chains. For instance, Bunge claims to have achieved 64% indirect traceability in the Cerrado , while Louis Dreyfus reports that 85% of its soybeans came through indirect sources in Paraguay with 1% of volume coming from areas of high risk of deforestation (“municipalities that have >20% of their surface converted from forest since 2004”).

Some additional, industry-wide information on indirect supplies could help eliminate any blindspot on deforestation in the supply chain of Argentina’s soy cake and oil exports.