A group of luxury fashion brands asked Trase to identify hotspots of deforestation risk in their supply chains for leather – not from cattle farmed in high-risk areas, but from soy present in animal feed.

Forests play a crucial role in the climate and biodiversity crises, acting as both a source and a sink of emissions and providing habitat for diverse species. Despite their critical role, forest and tree cover loss runs into the millions of hectares – in 2020 alone, the area of tree cover loss was greater than the United Kingdom. The World Resources Institute identified cattle production as the largest driver of global deforestation (amongst seven high-risk agriculture commodities). Leather is a crucial material for the fashion and luxury industries, bringing significant deforestation risk, particularly given the opaque nature of leather supply chains.

Companies manufacturing or selling products made from leather can be exposed to deforestation risk in a number of ways.

They could be buying leather originating in countries such as Brazil, Argentina and Paraguay where forests may have been recently cleared to make way for cattle farming. Or, when leather comes from cattle farmed elsewhere in the world, such as in Europe, the cattle may have been raised on feeds containing imported soy that was grown on land cleared to grow crops.

Over the last few years, there have been growing efforts to increase transparency in leather supply chains, spurred by concerns linked to issues such as deforestation, climate and animal welfare. In such a complex supply chain, information is often lacking on where leather comes from beyond the most immediate supplier.

In 2020, a group of luxury fashion brands – via the Responsible Luxury Initiative (ReLI) – worked with sustainable business organisations BSR and Trase to map their leather supply chains and understand levels of deforestation risk exposure through animal feed.

The companies shared supplier data so that Trase could map back through the tanneries to where the leather originated and indicate where soy in cattle feed was likely to have come from.

Data on the Trase platform identifies the subnational locations (eg municipalities) where soy is produced, maps areas of recent deforestation, and links them via trade to the country of first import.

The country of first import may not necessarily be the country of consumption. For example, soy intended for cattle feed in Europe may first be exported directly to The Netherlands, where it is processed from raw soy into feed, and then reexported to France, where it is fed to cattle. The analysis of leather supply chains took this into account using additional re-export data to include such indirect imports.

The next step was to try to complete the linkages in the supply chain by making connections between the soy importing country (both direct imports and via re-exports) and the brands’ leather products.

This study used data on the location of the slaughterhouse or tannery, based on the assumption that the cattle had been raised in the same country. With this location data, Trase was able to indicate the subnational areas (municipalities) in Brazil, Argentina and Paraguay from which leather producing countries were likely to have imported soy.

“Whilst the exposure of luxury brands to cattle-linked deforestation may be smaller than other industries, the industry has a significant role to play in forest protection and preservation. Trase’s assessment helped ReLI members understand their individual and collective risk in terms of soy embedded in the leather they purchase. Bringing transparency to this risk is an important step informing how and where members can most effectively act towards eliminating deforestation in leather supply chains.”

Identifying hotspots enables consumer brands to understand the level of deforestation risk they could be exposed to as well as which of their suppliers or intermediate countries of sourcing account for the largest component of risk. This can help brands take action by prioritising areas of their supply chain to focus on and identifying which suppliers to engage with. The process can inform practice at company level, but also the collective management and reduction of risk.

The analysis also highlighted where additional supplier information would be beneficial. Having visibility of suppliers further upstream in the supply chain to cattle farm level improves the accuracy of risk assessments and supports successful supplier engagement strategies.

The results of the analysis and insights they provide show what is possible with existing data. But having a greater understanding of linkages (as illustrated below) through increased disclosure of information would help make risk assessments more accurate and more actionable. In subsequent work, the group did further research into how imported soy is used in cattle production in three key leather-sourcing countries to better understand potential deforestation links and what steps could be taken to reduce deforestation risk. 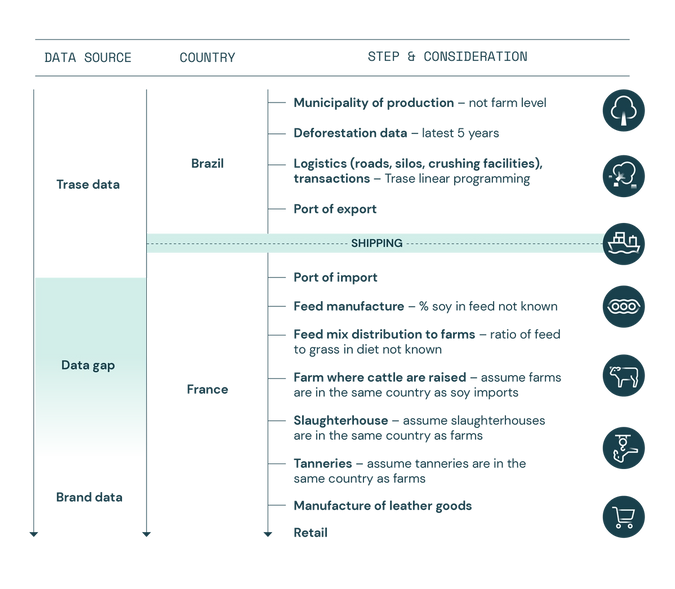 To assess soy deforestation risk in consumer goods which use animal products, such as leather, we need to complete the links in the supply chain. Although there may be gaps in the data, some assumptions can still provide insight into likely risk hotspots.

Download this case study as a PDF and read Trase's other case studies.