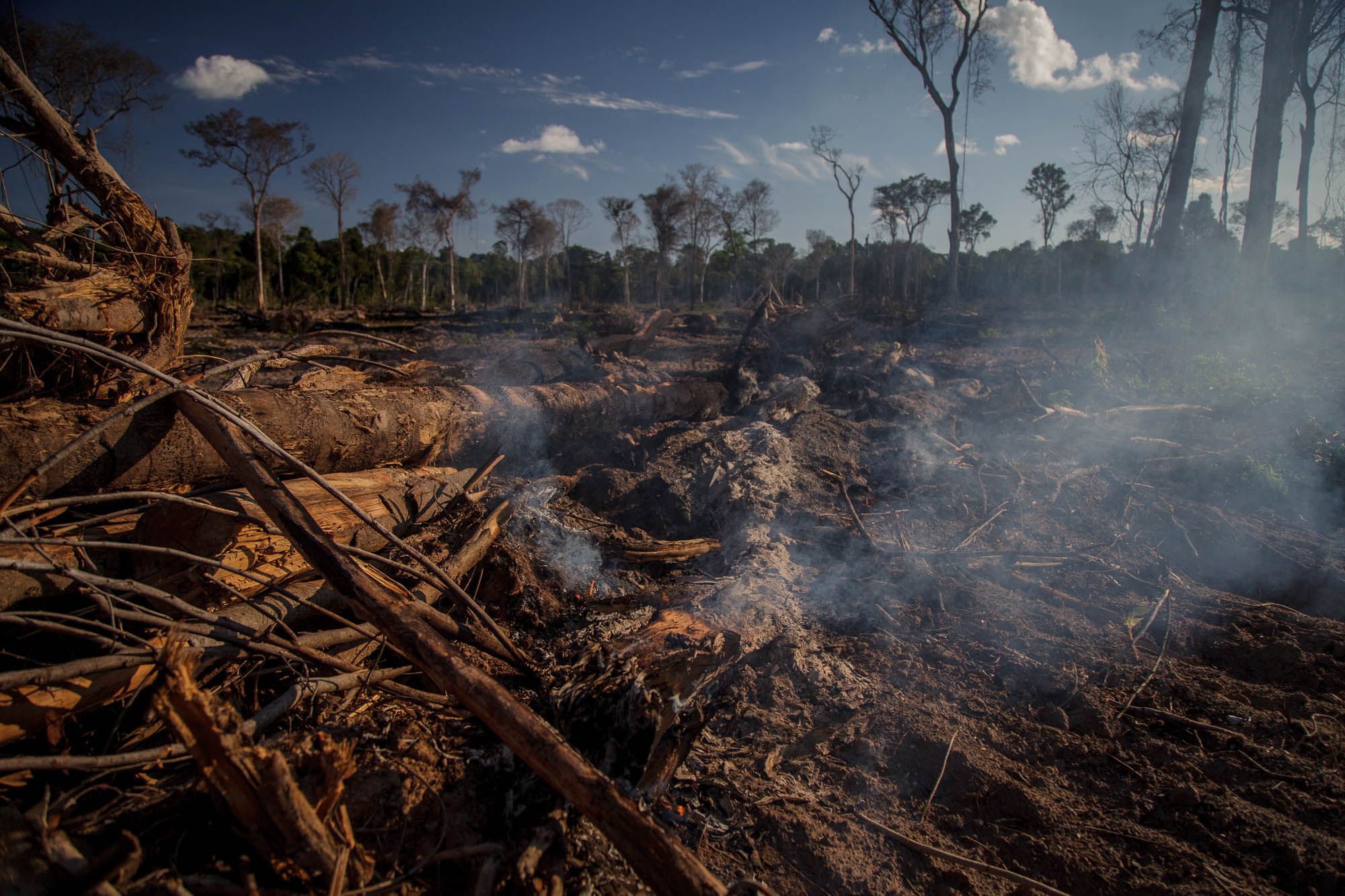 Agriculture is by far the most important cause of deforestation, yet cleared land is often not used to grow crops or raise livestock, according to new research. The findings have important implications for policymakers hoping to clean up supply chains for commodities such as soy, beef and palm oil.

Stopping deforestation is crucial to cutting carbon emissions and the impacts of climate change. The Intergovernmental Panel on Climate Change says that 23% of global greenhouse gas emissions in 2007-2016 came from agriculture and land-use change, approximately half of which is due to deforestation.

The crowning achievement of the COP26 climate conference in November 2021 was the Glasgow Leaders’ Declaration on Forests and Land Use when 145 countries, including the US, China and EU member states, committed to halt and reverse forest loss and land degradation by 2030.

As part of efforts to deliver on this commitment, governments in key commodity-consuming regions are developing legislation to clean up their supply chains. The EU is leading with a proposed regulation to prohibit the importation of commodities produced on deforested land including soy, beef and palm oil, which could be agreed in late 2022. The US and the UK have similar proposals.

Yet there has long been considerable uncertainty about the exact amount of deforestation that can be attributed directly to the expansion of agriculture to produce commodities. An oft-cited figure is that agricultural production drives 80% of tropical deforestation , but that study is more than ten years old and understanding of the causes of deforestation has improved considerably since then.

A research team led by Florence Pendrill at Chalmers University of Technology, Sweden, and involving many world experts on deforestation, reviewed the current evidence to provide policymakers with greater certainty on agriculture-driven deforestation and its mechanisms.

The study, published in the journal Science on 9 September, finds that agriculture is an even greater driver of deforestation than previously thought. But it also revealed a surprise.

Our review makes clear that between 90 and 99 percent of all deforestation in the tropics is driven directly or indirectly by agriculture. But what struck us was that a comparatively smaller share of the deforestation – between 45 and 65 percent –​​ results in the expansion of actual agricultural production on the deforested land. This finding is of profound importance for designing effective measures to reduce deforestation and promote sustainable rural development.

Clearing land for nothing

A big piece of the puzzle is just how much deforestation is ‘for nothing’. While agriculture is the ultimate driver, forests and other ecosystems are often cleared for land speculation that never materialised, projects that were abandoned or ill-conceived, land that proved unsuitable for cultivation, as well as due to fires that spread into forests neighbouring cleared areas. 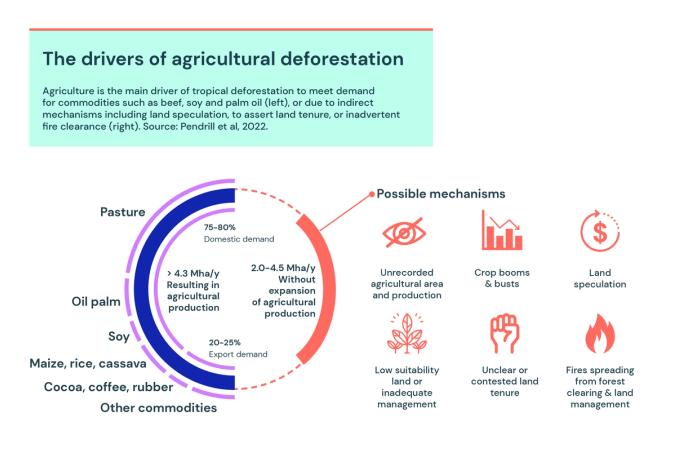 Understanding the significance of these drivers is crucial, whether for policymakers in consumer markets developing legislation on deforestation-free products, governments in producer countries responsible for rural development, or private sector initiatives for specific commodities.

The study makes clear that a handful of commodities are responsible for the majority of deforestation linked to actively producing agricultural land — well over half of which is linked to pasture, soy and palm oil alone. But sector-specific initiatives are limited in their ability to deal with indirect impacts such as land speculation.

But as our study shows, strengthening forest and land-use governance in producer countries has to be the ultimate goal of any policy response. Both supply chain and demand-side measures must be designed in a way that also tackles the underlying and indirect ways in which agriculture is linked to deforestation. They need to drive improvements in sustainable rural development, otherwise deforestation rates are likely to remain stubbornly high in many places.

The study points to the need for policies that go beyond risk management for specific commodities , towards partnerships between producer and consumer markets and governments. These should include incentives that make sustainable agriculture economically attractive, while disincentivising further land conversion and supporting vulnerable smallholder farmers. The private sector has an important role to play in supporting these reforms. A stronger focus on domestic markets is also needed, as they are often the biggest drivers of demand for many commodities, with partnerships between companies, governments and civil society in producer jurisdictions.

The study highlights three major gaps where further evidence is needed to target efforts to reduce deforestation. Firstly, there is a lack of consistent global deforestation data, meaning that we lack confidence about overall conversion trends. Secondly, we lack data on other commodities such as cocoa and coffee. Thirdly, little is known about tropical dry forests and forests across Africa, a potential new frontier of deforestation.

What is most worrying, given the urgency of the crisis, is that each of these evidence gaps pose significant barriers to our ability to drive down deforestation in the most effective way by knowing where the problems are concentrated and understanding the success of efforts to date. Given the critical importance of curbing deforestation to mitigate the climate and biodiversity crises, and help improve the livelihoods of millions of people worldwide, addressing these evidence gaps should not be seen as insurmountable barriers.

The Glasgow Declaration recognised the importance of jointly addressing the crises of climate and biodiversity loss by setting a new level of ambition for tackling deforestation and promoting sustainable agriculture. It is paramount that we begin to see policymakers prioritise the realisation of this ambition.

The blog was first published by the World Economic Forum as To tackle deforestation we need to focus on land use. Here’s why.