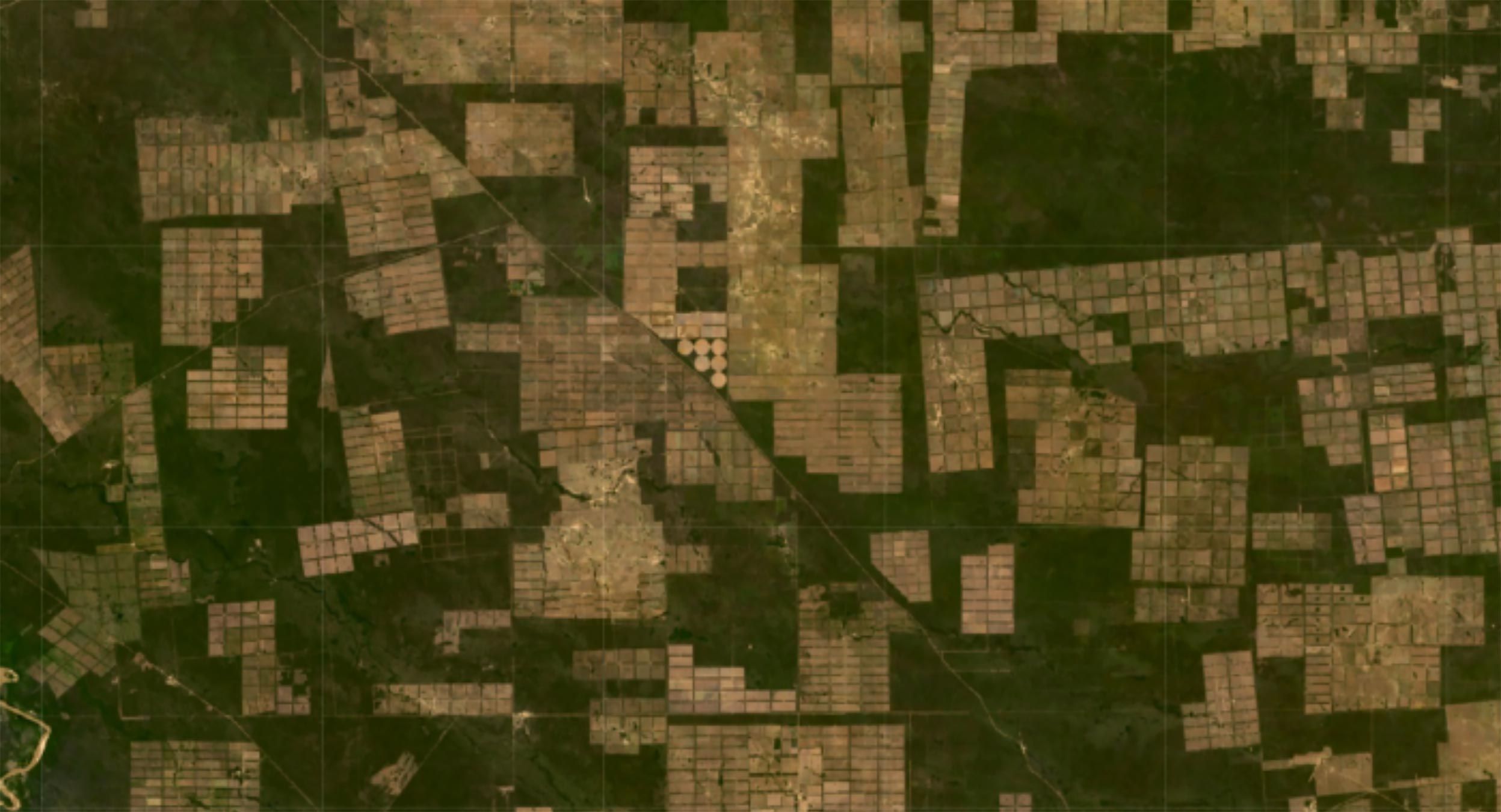 The development of agriculture in the Chaco in Paraguay, USGS Landsat images.

Paraguay’s Chaco region has one of the highest rates of deforestation in the world. Trase’s research into the soy and beef supply chain is helping to bring much-needed transparency.

Paraguay’s Chaco region has one of the highest rates of deforestation in the world, as forests are cleared primarily for cattle ranching. And with the Chaco set to be a new agricultural frontier for soy production, this rate could further increase.

Trase’s research into the soy and beef supply chain in Paraguay improves transparency in these sectors. Our subnational datasets for Paraguay map the links between soy and beef-producing jurisdictions, trading companies and subsequent countries of import. Trase can therefore show how Paraguay’s beef and soy exports are linked to agricultural conditions, including specific social and environmental risks such as deforestation, in the places where they are produced. This enables companies, governments and others to understand the risks and identify opportunities for more sustainable production.

What is the economic importance of soy and beef for Paraguay?

Soy and beef are vital to the Paraguayan economy. Paraguay is the world’s fourth largest soy exporter, selling 9.5 million tons in 2018. Soy accounts for 50% of Paraguay’s exports and beef a further 15%.

In 2014 the Paraguayan government launched its 2030 National Development Plan . It aims to create a sustainable and competitive economy, introduce a more transparent approach to territorial management and increase national GDP by 6.8% a year in the process. Given the importance of agriculture to Paraguay’s economy, such ambitious growth will likely put further pressure on the country’s remaining forests.

Paraguay is a landlocked country, bordering Brazil, Argentina and Bolivia, and divided into two contrasting regions by the Paraguay river.

Eastern Paraguay’s climate and geography is well-suited to soy: the generally flat land receives high levels of sunshine and rain, with an annual rainfall of around 1650mm. Currently almost all the country’s soy production occurs in the east. The Chaco is to the west of Paraguay. It is a sparsely populated lowland covering the three largest of Paraguay’s seventeen departments. The Chaco includes large areas of native semi-arid to semi-humid forest, rich in biodiversity, which is a crucial carbon reservoir.

Despite hosting just 2% of Paraguay’s population, the region is home to many indigenous groups, who have historically faced numerous injustices and discrimination, as well as Mennonite communities who have farmed in the region since the early 20th century and now operate much of the cattle raising in the region. Following economic expansion in the 1960s and 1970s , a developmental push opened the Chaco up for cattle ranching. The region remains a major area for beef production in Paraguay, hosting 45% of Paraguay’s 13.5 million cattle.

What are the risks of further cattle and future soy expansion in the Chaco?

In 2004, a zero deforestation law established a moratorium on the conversion of forest to agricultural and pasture land in eastern Paraguay. But in western Paraguay, farmers are allowed to clear land for agriculture. Farmers with more than 20 hectares of land are legislated to preserve at least 25% of their forest area, with further requirements to maintain areas of riparian forest and protective barriers of forest between plots. This leads to the protection of up to 45% of forest per property, whilst the remainder can be cleared.

Between 2013 and 2017, Paraguay lost 1.2 million hectares of forest in the Chaco, mainly due to the expansion of cattle farms. As the 2030 National Development Plan encourages growth of the beef sector, further cattle-related deforestation is likely to occur.

Soy production has not yet been developed at a commercial scale in the Chaco. The main bean varieties planted are not suited to the Chaco’s dry conditions and the roads can be heavily flooded, making them sometimes impassable for trucks. Nevertheless, soy production has increased in recent years — the land area used to cultivate soy in the Paraguayan dry Chaco has gone from zero hectares in 2011 to 5,315 hectares in 2018 .

In November 2019, the Paraguayan government approved the introduction of a new drought-resistant soybean variety . This could make it easier to grow soy in the dry Chaco. Land is currently far cheaper there than in eastern Paraguay, and as there is no deforestation moratorium to protect the area, it seems likely that large-scale soy agribusiness could soon move into the region.

What is the role of Trase?

Enrique Molas, a consultant with the Trase project in Paraguay, explains how the insights provided by Trase can support a transition towards more sustainable agriculture, by providing a more accurate picture of beef and soy supply chains and their associated environmental and social risks.

"Trase can improve the traceability and transparency for both the soy and beef sectors in Paraguay. With Trase data, the Paraguayan government could improve their control systems and incentivise more sustainable production systems. And Trase can also help the private sector. For example, investors and lenders could use Trase to improve their socio-environmental analysis systems and reduce their risks in granting loans to producers and / or traders associated with deforestation."