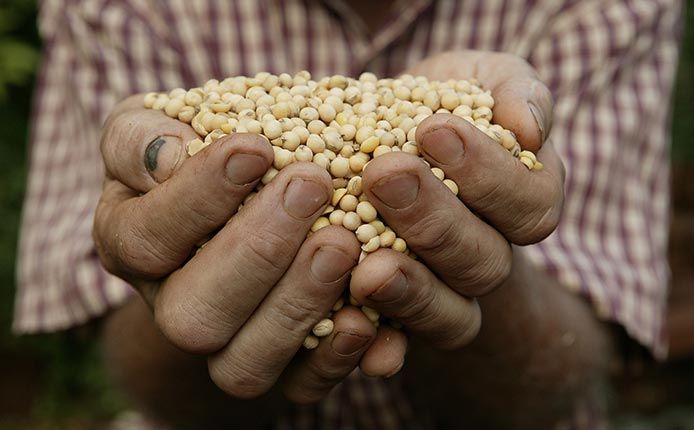 The major "ABCD”  multinational grain traders – ADM, Bunge, Cargill and Louis Dreyfus – dominated the Paraguayan export market in 2014, handling more than two thirds of the country’s soy exports that year (64%). These traders own significant storage and crushing capacity, which has been key to their business model. They have typically operated by advancing soy contracts to producers, in exchange for seeds, fertiliser, bean storage and processing.

But this business model is being challenged by emerging traders like China’s COFCO and Russia Sodrugestvo. These traders are investing less in grain storage and crushing facilities and focusing more on exporting raw soybeans. While Cargill and ADM continued to dominate the Paraguayan export market in 2018 (accounting for almost 40% of all soy exports), COFCO and Sodrugestvo (or Sodru) were the third and fourth largest exporters of Paraguayan soy in 2018, respectively, handling 20% of soy exports.

There are various factors behind the rise of these new entrants. COFCO and Sodru began exporting soy from Paraguay in 2014 and 2015. Sodru, despite being legally based in Luxembourg, is a Russian company that largely sources soybeans to Russia. COFCO Agri, despite not being able to directly trade to China from Paraguay, is owned by the state-owned COFCO Group, which is a key player in assuring China’s food security. Paraguay provides an opportunity for both companies to expand their sourcing strategy.

In its first year of trading soy from Paraguay, Sodrugestvo provided almost 70% of exports to Russia. Through a joint acquisition with Gical SA, Paraguay’s largest port terminal company, Sodru has since invested heavily in port infrastructure with plans to export over 2 million tonnes of soy per year (20% of all soy exports from Paraguay in 2018). Increased Russian demand for soy may be linked to economic sanctions; specifically, a ban on certain agricultural imports to Russia from the US and the European Union, including meat, which is likely to have boosted domestic livestock sector in Russia.

Since COFCO International’s purchase of large commodity traders Noble Agri and Nidera in 2014, COFCO has played a key role in the export of soybeans from Latin America. In 2018 alone, COFCO exported almost 9 million tonnes from Brazil, Argentina and Paraguay and was the third largest exporter of soy from Paraguay. Most of the soy COFCO exported from Paraguay was destined for Argentina (79%), where there is high demand for Paraguayan beans for processing on account of their high protein content and where tax conditions incentivise the export of processed products.

COFCO and Sodru traded exclusively in exports of raw soybeans, as opposed to secondary processed products such as cake or oil. By contrast, a third of the ABCD companies’ soy exports from Paraguay were raw beans in 2018. COFCO and Sodru’s low investment in crushing facilities in Paraguay means they can more easily crush their beans wherever there is an economic incentive, whether in Russia or Argentina.

Both traders are partly reliant on the soy spot market than on futures trading and contracts with producers, so they can wait for prices to fall before they buy their soy. Yet buying on soy on the spot market makes it harder for traders to know where their product has come from and if it has been produced in an area of recent deforestation.

Sodru also does not have a zero-deforestation commitment that covers exports of soy from Paraguay. Given some predictions that soy production in the Chaco is set to rapidly increase, raising the risk of both direct and indirect deforestation, there is an urgent need for increased government oversight, scrutiny and traceability of Paraguay’s soy supply chain amongst all exporters, including new entrants.