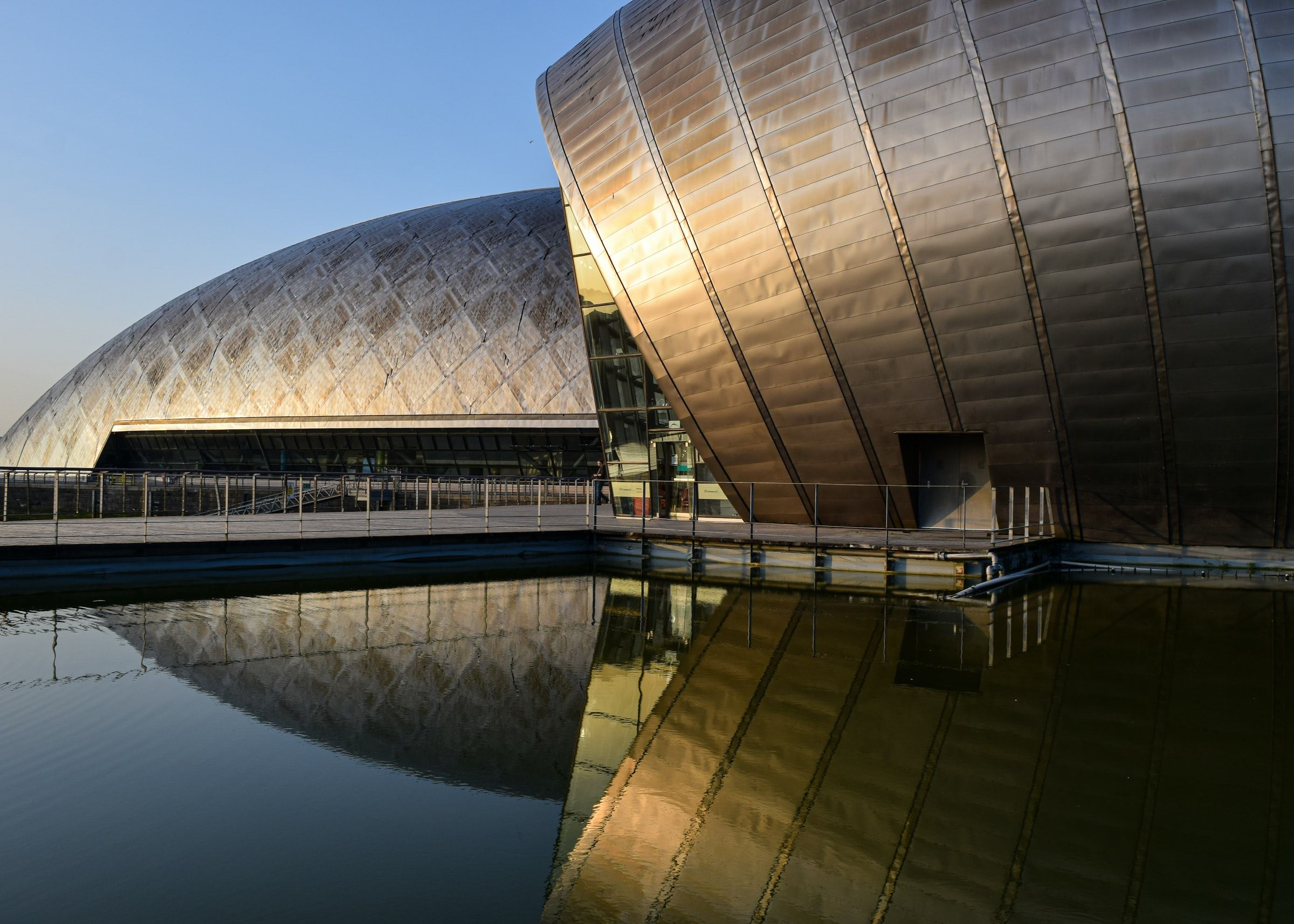 Moving beyond commitments : How to start eliminating deforestation from investor portfolios

Stillness and reflection at the Glasgow Science Centre at sunset (Fredrika Carlsson, Unsplash)

Investors need to understand deforestation-risk exposure in their portfolios to inform effective engagement activities and deliver on COP26 pledges.

The COP26 climate talks started with more than 100 governments representing over 85% of the world’s forests committing to halt and reverse deforestation by 2030 . The declaration was backed up with $12bn of public funds to protect and restore forests alongside $7.2bn of private investment.

Over 30 financial institutions joined the UN’s Race to Zero campaign by committing to use their best efforts to eliminate agricultural commodity-driven deforestation from portfolios by 2025. There were also commitments from 10 global commodity traders to halt deforestation .

While the combined $8.7 trillion in assets of the 30 financial institutions that signed the Race to Zero commitment is significant, key absent signatories included many of the top 20 Brazilian beef, soy and Indonesian palm oil investors most exposed to deforestation risk.

Many of the largest passive investors most exposed to deforestation risk via the companies in the indices tracked by their index funds, such as Blackrock , Vanguard and State Street , were also absent. Indeed the combined assets of these managers alone is approximately $20 trillion. Difficulties in changing long-held index methodologies aside, there was no reason why passive investors could not sign the commitment and reverse a trend of abstentions and blocking deforestation votes at shareholder meetings .

The commitments from financial institutions are welcome, but observers all too familiar with the “blah, blah, blah” (as climate activist Greta Thunberg put it) of headline-grabbing commitments are asking questions such as:

The Finance Sector Roadmap for Eliminating Commodity-Driven Deforestation , developed by the Finance & Deforestation Advisory Group (of which Trase Finance partner Global Canopy is a member) and launched at COP26, answers many of these questions by defining best practice for financial institutions to implement a 2025 commitment, providing intermediate steps, guidance and points to data and tools to meet those steps.

So how should investors measure their exposure to deforestation? There are now a number of tools and datasets available to investors highlighted in the roadmap – including the equity risk allocation methodology of Trase Finance .

Trase Finance uses supply chain modelling to allocate annual commodity-specific deforestation risk in hectares to investors based on their total equity ownership in commodity traders exposed to deforestation via investing subsidiaries and fund shareholdings. For the first time this allows for a quantifiable and robust way to rank asset managers according to their exposure to deforestation risk.

Reviewing the exposures of the signatories shows interesting results (see table). For most, deforestation-risk exposure from Brazilian soy and beef and Indonesian palm oil is relatively small – often less than one hectare given that most mutual fund managers own large numbers of small minority shareholdings in portfolio companies.

However, for a number of signatories the equity exposures are considerably larger, going into hundreds of hectares of deforestation risk per year. Critically, Trase Finance data is very conservative in its estimates as it focuses on traders of three key commodities accounting for 60% of global commodity trade, meaning many investor groups are likely to face larger exposures when holdings in other supply chain companies and commodities are considered.

Clearly there is still much to do before 2025 to achieve deforestation-free portfolios, but starting with understanding current quantitative deforestation risk exposures is essential.

Time is of the essence

The time for progress is short with the 2025 deadline looming. While for some portfolio companies the year-on-year deforestation-risk trend is downward , Trase Finance shows that for others it is increasing (see graphs).

While Glencore spun off and rebranded its Glencore Agriculture arm to become Viterra, it retains a 49.99% stake in the venture. Thus signatories need to continue to engage with Glencore on soy deforestation given ongoing exposure, even if there is little mention of grain, food and soy as future strategic priorities for the business on the main Glencore website .

An important question is how long asset managers will give portfolio companies to eliminate deforestation risk before the 2025 deadline and whether failure to do so will trigger divestment. 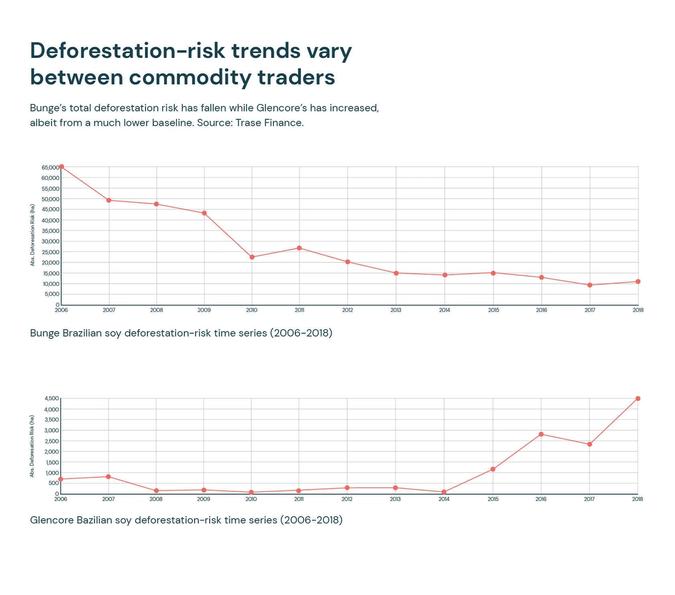 Given the typical contract lengths for supply chain agreements and the long lifespan of newly constructed agricultural assets, it is clear that progress needs to be made immediately. As financing new oil and gas projects flies in the face of net-zero commitments, financing the development of commodity production assets in frontier regions should be considered inconsistent with zero-deforestation pledges.

To help deliver this, signatories could agree not to increase equity positions in discretionary funds in traders whose deforestation-risk curves are not showing a clear downward trajectory compared to the baseline.

Similarly, investors could also agree a moratorium on subscribing to new issuances of corporate debt of those not able to demonstrate that they are decreasing their deforestation risk. Even though many of these issuances are for general purpose financing, inevitably some of these funds could be deployed to deforestation-risk infrastructure projects such as ports, grain elevators, storage facilities, crushing facilities and the like.

Ceasing to subscribe to debt issuances in particular could be a useful leverage point for signatories looking to incentivise portfolio companies to adopt deeper traceability requirements and other improvements. Medium-term notes, a common debt instrument issued by traders, will typically have a 5-10 year maturity, meaning institutional investors purchasing bonds today would typically be exposed to credit and ESG risks linked to use of proceeds until perhaps 2031 and beyond.

Trase Finance is the only platform available to investors to manage their portfolio deforestation risk using quantitative tools which calculate a total exposure in hectares of forest loss. Integrating a variety of geospatial, supply chain, ownership and financing data, the platform calculates and aggregates the risk of over 400,000 equity positions to assign a total deforestation risk to investors. Combined with policy frameworks and tools, this enables investors to adopt targeted engagements with exposed portfolio companies.

To reference this article, use the following citation: Phare, J. (2021). Moving beyond commitments : How to start eliminating deforestation from investor portfolios. Trase. https://doi.org/10.48650/BWAM-5E27