Most soy imported into the EU is used to feed farm animals (credit: www.peopleimages.com)

By Helen Bellfield and Osvaldo Pereira

Trase analysis of the EU’s draft due diligence regulation finds that the proposal fails to account for more than half of the bloc’s deforestation risk from imports of soy due to its exclusion of soy used in animal feed.

The EU is about to publish its long-awaited regulation to address its overseas deforestation footprint. This is expected to be a due diligence obligation on companies placing goods on the market to assess and mitigate risks that these products are associated with deforestation.

A widely circulated leaked draft of the regulation suggests this will be limited to six commodities – beef, cocoa, coffee, palm oil, soy and wood products – which are linked with the majority of the EU’s deforestation footprint. This list has already been criticised as missing key commodities such as leather, maize and rubber. Other gaps include processed food products containing palm oil, which could enable the continued importation of commodities linked to deforestation.

Analysis of the proposals by Trase has found that exclusions of specific soy and beef products threaten to further undermine the EU’s ambitions to tackle deforestation.

Each product is given a code under the ‘harmonised system’ (HS) for product classification which helps businesses and customs authorities identify traded products. For soy, the draft regulation proposes to include soybeans (HS 1201), soy flour (HS 1507) and soy oil (HS 1507), but exclude soy cake used for animal feed (HS 2304). This is a major omission because most of the soy imported into the EU is used for animal feed.

Trase maps soy deforestation risk associated with imports by EU countries from Argentina, Brazil and Paraguay. Breaking down the commodity data by product (soybeans, soy oil and soy cake) shows that the EU was exposed to 25,000 hectares (ha) of deforestation risk from imports of soy cake from South America in 2018. This represents 59% of the EU’s total risk when looking at all soy imports. 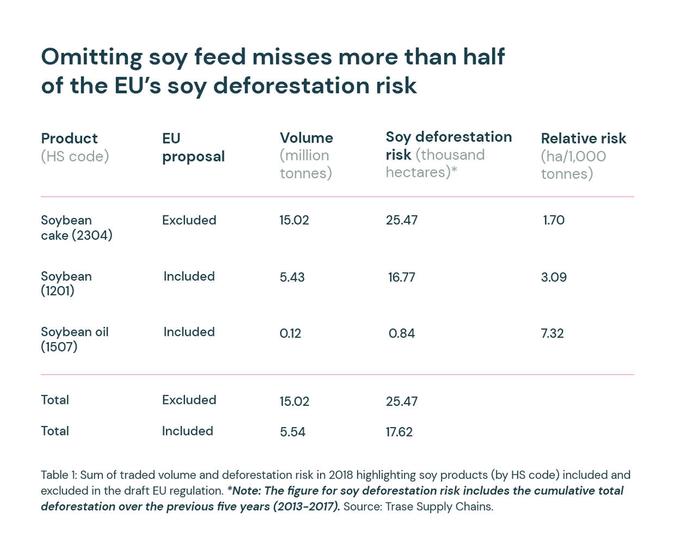 Despite the high relative deforestation risk of offal, at around 90 ha of deforestation for every thousand tonnes imported, the volume of EU imports is very low, making it difficult to be precise about its impact on deforestation. 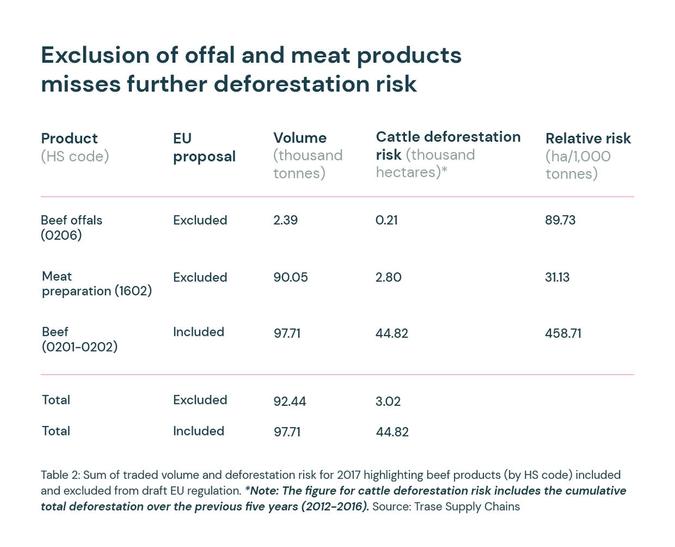 The due diligence proposals are the EU’s flagship policy to meet its commitment to tackle commodity-driven deforestation, as well as to meet the high-profile declaration to halt and reverse deforestation by 2030 made at the COP26 climate change conference in Glasgow. But the omission of deforestation-risk products such as soy animal feed could weaken the impact of its plans.