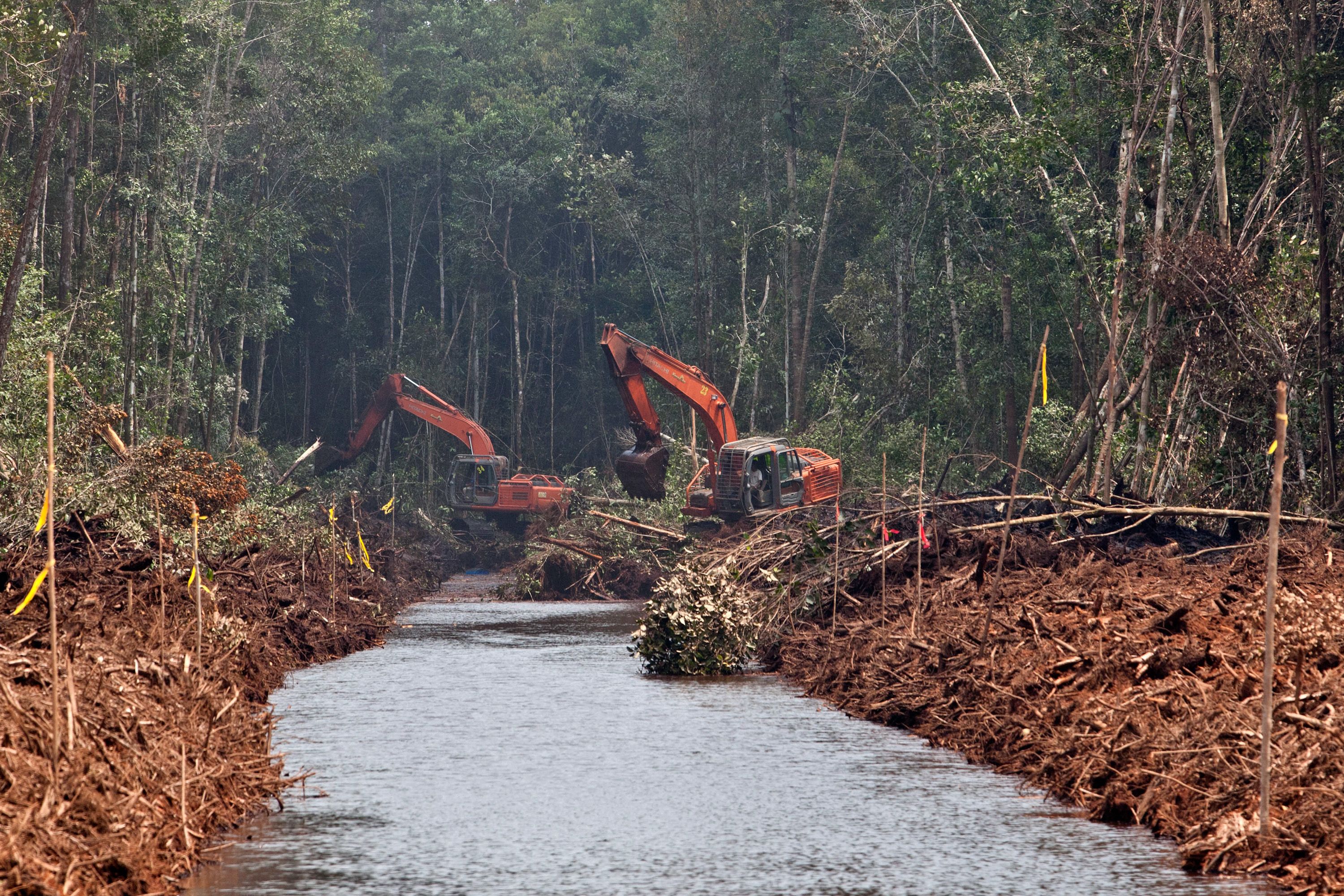 Over 40% of Indonesia’s pulpwood is grown on drained peatlands, causing significant carbon emissions and health risks from catastrophic fires

Growing pulpwood on Indonesia’s peatlands is contributing to climate change, damaging human health and impacting economic activity. Indonesia has the world’s largest areas of tropical peatlands, which hold vast stores of carbon – even more than Indonesia’s upland rainforests . Today, over 1 million hectares of peatlands have been converted to pulpwood plantations, representing 41% of the sector’s plantation base (see Figure 1).

When peatlands are drained for industrial plantations, the soil begins to emit carbon into the atmosphere through a process that can only be stopped by restoring it to its naturally water-logged state. Pulpwood plantations on drained peat release on average 100 tonnes/hectare/year of CO2 and “best practice” water management only reduces CO2 emissions by 20% at most, according to tropical peat experts.

The growing risks of peatland fires

Drained peatlands can easily catch fire, increasing carbon emissions even further. Peatland plantations were a major cause of Indonesia’s catastrophic fires during 2015 and 2019. Although a greater area of forests burned in the Amazon in 2019, Indonesia’s fires resulted in higher total greenhouse gas emissions because peat fires produce such a high level of emissions.

Burning peat produces a noxious haze, imperiling the health of millions of people – especially the region’s youngest citizens – and contributing to large numbers of early deaths . When the haze blankets Indonesia and surrounding countries like Singapore, entire populations shelter inside to avoid the harmful air. Schools are closed and air travel cancelled as the economic costs, estimated to be US$16 billion for the 2015 episode and US$5 billion for the 2019 fires, pile up.

The role of Indonesia’s pulpwood plantations in these recurring fires is documented in the Government of Indonesia’s data on burned areas, which is displayed on the Trase platform. In 2015, 366,000 hectares burned inside the pulpwood concessions that supply Indonesia’s pulp mills (see Figures 2 and 3). In 2019, almost 100,000 more hectares were burned.

Future fires could be worse as climate change makes the El-Nino events that drive harsh fire seasons even more intense. Indonesia’s major pulp producers claim they will mitigate the fire risk from drained peat by managing water levels, but peat experts warn that anything short of restoring the peat’s original water-logged state means the land will remain susceptible to fire.

Both of the industry’s major producers, the Sinar Mas and Royal Golden Eagle Groups, have made corporate commitments to manage peatlands in a responsible manner and to have no new development on peat in their supply chains. Yet Trase shows that each group continues to source from concessions with a significant share of wood fibre plantations established on drained peat (over half for suppliers to Sinar Mas and more than a third for suppliers to Royal Golden Eagle).

Although the rate of new plantation establishment on peat has declined, neither group has committed to phase-out its plantations on peatlands. Without active steps to transition wood supply away from peat soils, the Indonesian pulp sector will continue producing globally significant levels of carbon emissions and endangering the health of millions of Indonesians for decades to come.

Indonesia pulp sector’s progress on deforestation hangs in the balance