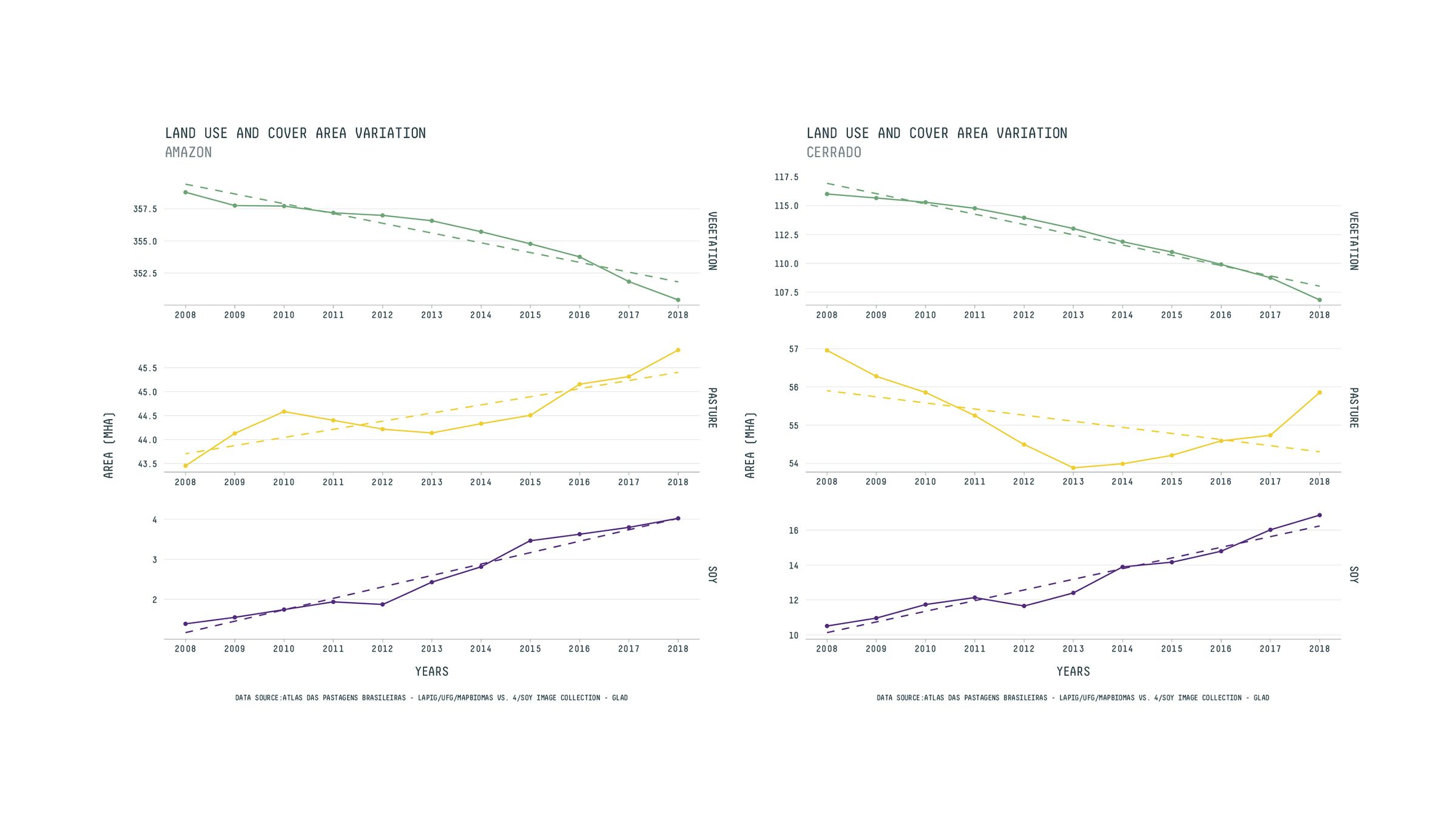 Despite the success of the Amazon Soy Moratorium in reducing direct conversion of forest to soy, the crop is indirectly linked to deforestation via the displacement of cattle pasture.

Increasing agricultural productivity on existing farmland – sustainable intensification – is widely viewed as an essential step in efforts to reduce further agricultural expansion into remaining forests and other ecosystems. Nowhere has seen more interest in the promise of sustainable intensification than the tropical and subtropical regions of South America, where most deforested land is now low-productivity cattle pasture with very low stocking rates.

The assumption behind sustainable intensification for much of the region is that the productivity of cattle pasture can be increased to make space for the expansion of crops, such as soybeans, without the need to clear more forest. An additional assumption is that constraints on land availability due to deforestation restrictions, whether by law or by voluntary initiatives such as the Amazon Soy Moratorium in Brazil and private-sector zero-deforestation commitments , provide a further incentive to make the most of already cleared land and avoid further deforestation.

Unpublished analyses by the Trase team have found that while the majority of soy expansion across Brazil has occurred on existing pasture, the total area of pasture has remained more or less unchanged. This is due to the conversion of old pasture to cropland (mostly soy) being offset by continued expansion of new pasture into forest and savannah. This dynamic suggests that crop expansion – and soy expansion in particular – is playing a key, indirect role in driving deforestation, despite the success of the Soy Moratorium in the Amazon in significantly reducing direct conversion of forest for soy since 2008. These results also cast doubt on any conclusion that agricultural production is being decoupled from deforestation in the Brazilian Amazon and the Cerrado .

The current area of pasture in Brazil now is about the same as in 2006 (around 180 million hectares), and just 1.4% less than its peak in 2009. About 4.2 Mha of native vegetation was converted to pasture in the Amazon in 2008–2018, and 5.9 Mha in the Cerrado. In the same period, around 19 Mha of existing pasture was lost in the two biomes, largely to cropland.

Soy was the major crop to expand in area in both biomes (with all others beings stable or decreasing), which has increased across these biomes by 8.9 Mha since 2008 to reach 20.8 Mha in 2018. The largest relative increase in soy across Brazil´s biomes since 2008 occurred in the Amazon (+272%, 2.6 Mha), followed by Matopiba (+204%, 2.0 Mha). In the Cerrado, soy currently occupies 23% of the pasture that was lost between 2008 and 2019, while in the Amazon soy occupies 22%. These percentages will almost certainly increase, as it can take three to five years (depending on the region) for land that is cleared for soy to be placed into production, due to the time needed to prepare the land, secure licensing and access credit.

Overall, and in both the Amazon and Cerrado, for every hectare of soy expansion onto pasture there is at least one hectare of pasture expansion onto forest. While additional research would be needed to identify a firm causal link, this dynamic strongly suggests that soy is indirectly linked to deforestation via the displacement of cattle pasture. This challenges the widely held assumptions that cattle production is driving the majority of deforestation in Brazil and that soy expansion is decoupled from deforestation, even in view of the undeniable success of the amazon Soy Moratorium in preventing direct conversion of forest to soy.

To address the challenge of indirect land-use change linked to soy, it is vital that conservation and supply chain policies do not focus exclusively on one commodity (soy), or one region (the Amazon) but consider all the major commodities that are competing for available land (in particular soy and cattle, but also cotton, corn and other major crops). Efforts to monitor the success of any supply chain intervention should also consider the overall pattern of deforestation and not only that of a specific commodity. If supply chain and deforestation policies remain focused on specific commodities and regions, they risk cleaning up the supply chains of individual companies and buyers, but not contributing to a net decrease in deforestation.