Tropical forest loss is often driven by the consumption of agricultural products far away from where they are produced. Spurred on by commitments to address deforestation, such as the Amsterdam Declarations Partnership, and to prepare for emerging EU legislation on deforestation-free products, countries are increasingly interested in understanding how their consumption is contributing to the problem, in order to identify and prioritise actions to tackle it.

Here, we discuss three ways of doing this: through an analysis of direct trade, re-export-adjusted trade, and full consumption-based accounting. While each has its own advantages and drawbacks, these three alternative, but equally valid, perspectives can complement one another to reveal how a country’s consumption is driving deforestation and highlight opportunities for action.

In a project with the German Agency for International Cooperation (GIZ) , Trase has undertaken this assessment for Germany, but the approaches outlined below can be applied to other countries.

The simplest of the three approaches estimates the deforestation risk directly imported from producer countries into a consumer country such as Germany. To do this, we first need data on the deforestation associated with the production of specific commodities in specific places, and then on the volumes of these commodities exported to Germany. This can be done at the country level, using national deforestation statistics , which can then be combined with international trade records such as those from the UN Food and Agriculture Organization (FAO). It is also possible to use subnational Trase data to get a more detailed understanding of particular countries and commodities; for example, revealing the Brazilian municipalities in which Germany’s soy deforestation impacts are concentrated.

A complicating factor is that some commodities are processed into other forms before being traded. Provided that the link between these raw and ‘derived’ products is clear, it is possible to calculate the deforestation risk associated with these processed commodities. For example, we know that four tonnes of oil palm fruit are processed to produce one tonne of palm oil and palm kernels on average.

The direct trade approach has the advantage of being straightforward to implement, as it does not require complex modelling, and it will likely capture a lot of the economically important exports to the consumer country. Furthermore, it highlights commodity imports over which governments or companies may have the most ability to change procurement activities or incentivise sustainable production practices.

However, focusing only on direct trade does not capture the complexity of real supply chains, since many commodities associated with deforestation are imported indirectly through intermediary countries, or in highly processed forms where the link back to the place where it was grown is unclear. The two approaches outlined below help address these problems. 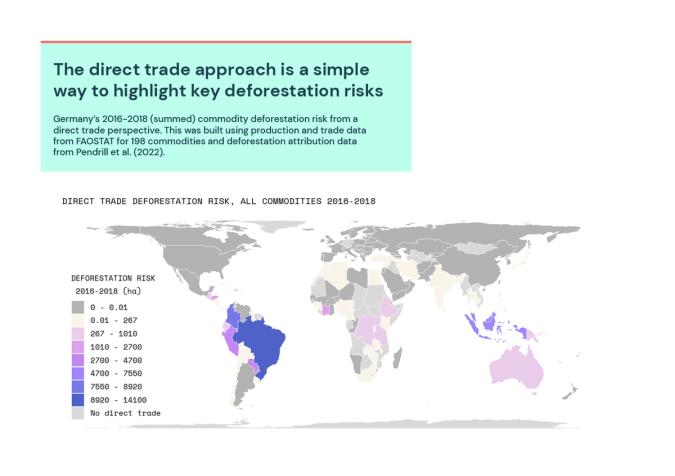 The problem with the direct trade approach is that international trade often happens in multiple steps. For example, a shipment of soybeans grown on recently deforested land in Brazil might first arrive in the Netherlands before travelling on to be processed and consumed in Germany. To complicate things further, some processing may happen in the first country of import – turning soy into soybean cake and oil, for example – before these processed products are then exported elsewhere. There may even be multiple intermediate countries and processing steps before the final destination where the product is consumed.

Our re-export-adjusted method is similar to the direct trade approach, except that we use FAO data on the processing and global trade of primary and derived commodities to factor in these intermediate steps. How this affects a country’s imported commodity deforestation risk will depend on the country’s role in the international trade system. In the case of Germany, the total re-export-adjusted risk between 2016-2018 decreased by 21% compared to the direct trade approach, suggesting that Germany acts as a ‘re-exporter’ of some deforestation-risk commodities. In other words, the approach accounts for the fact that some direct imports into Germany (or any other country) may then be exported, meaning that the deforestation risk is distributed further downstream in the supply chain.

However, this method has its limitations. Because we lack traceability of individual shipments beyond the first country of import, we have to assume that the deforestation risk from the producer country is then shared proportionally among the countries further downstream, according to their share of trade volume. This brings an additional element of uncertainty to the results. For example, it might be that Germany’s soy imports from the Netherlands happen to contain a disproportionate amount of the deforestation risk that the Netherlands has, in turn, imported from Brazil, but it is not possible to tell that from the trade data.

Correcting for re-exports can also be more technically demanding, particularly if the goal is to identify multiple intermediary countries involved. In addition, discrepancies in trade records and data limitations, along with stock carry-over between years, mean that a portion of trade is often assigned an ‘unknown’ origin, meaning deforestation risk may be underestimated.

Finally, although we can factor in the first couple of processing steps, as with direct trade analysis, this approach is limited to primary (harvested) commodities and their immediate derivatives. We still miss the deforestation risk of commodities imported in highly processed forms, such as the palm oil in a frozen pizza or toothpaste.

The re-export-adjusted approach should be seen as a middle ground that retains the clarity of information on direct trade while adjusting for intermediate flows and thereby gives a more complete picture of a country’s imported deforestation risk, but falls short of a full supply chain assessment. 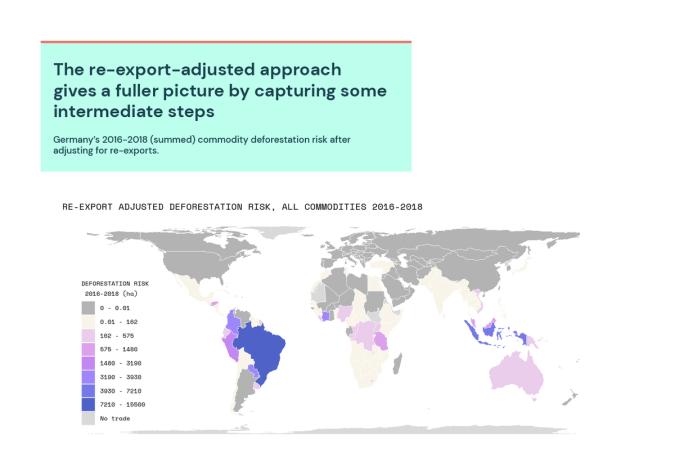 The consumption-based method gives the most holistic view of a country’s imported deforestation risk. It does so by combining deforestation statistics with a global economic model known as multi-regional input-output (MRIO).

This model simulates how different economic sectors are linked to each other, both within and between countries, enabling flows of commodities and products to be traced around the world. Importantly, trade is modelled on the basis of financial, rather than physical flows. This approach attempts to link commodity production and its associated deforestation to its ‘final use’, meaning one can identify the ultimate drivers of deforestation regardless of the length and complexity of the supply chain.

For example, the deforestation risk associated with soy is passed into the cattle supply chain as animal feed, ending up ‘embedded’ in a leather product for sale in Germany. A consumption-based approach is able to attribute the deforestation risk from soy to Germany’s leather consumption, even though soy is not an ‘ingredient’ of leather. In contrast, the previous two approaches would only take into account the initial trade of soy, which might be imported and processed into animal feed in other countries, and would therefore not say anything about the consumption in Germany that has driven the deforestation.

However, while this approach is powerful, it has important trade-offs in terms of resolution. In the MRIO model, some countries and commodities are grouped together into broad categories, and the economic sectors that the model depends on are often relatively coarse. For instance, oil palm, soybeans and rapeseed are grouped together into a single ‘oilseeds’ category.

In an attempt to overcome this limitation, researchers at the Stockholm Environment Institute have developed a ‘hybridised’ MRIO framework, called input-output trade analysis (IOTA), which combines physical production and trade data of individual commodities (such as soybeans and soybean oil and cake) with the modelled financial flows between and within countries to maintain commodity-level detail as far as possible along the supply chain.

Because this approach can account for deforestation risk embedded in highly processed products – of which Germany is a net importer, rather than exporter – Germany’s consumption-based deforestation risk is more than double that of the other two approaches.

Deforestation linked to Germany is also found across a broader suite of countries in regions such as tropical Africa, showing how Germany’s consumption is having an impact in these places through more indirect routes than can be captured in the first two approaches. 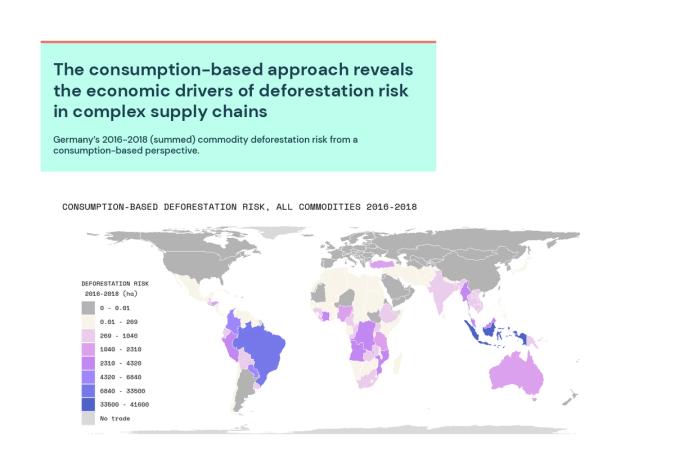 Assessments of imported deforestation risk have typically been carried out with national datasets, but Trase’s powerful subnational resolution can be combined with any of these three approaches to give much more detailed information on where deforestation risk is coming from. For more information, see our Explainer on the differences between approaches using national ( Pendrill et al. (2022) ) and subnational ( Trase ) data.

Choosing which of the three approaches is most appropriate will depend on the purpose of the deforestation-risk assessment. Direct imports enable a rapid and easily updated assessment of where a country’s bilateral trade relationships may be importing large amounts of deforestation risk. Since the link back to deforestation is more tangible, this approach could help identify ways to more quickly eliminate deforestation risk from imports and exert influence to improve production practices in producer countries.

Once their strengths and limitations are understood, all three have something to offer, and should be seen as complementary ways to measure a country’s imported deforestation risk.

To find out how these approaches are applied in practice, read the Trase research report Assessing tropical deforestation in Germany’s agricultural commodity supply chains