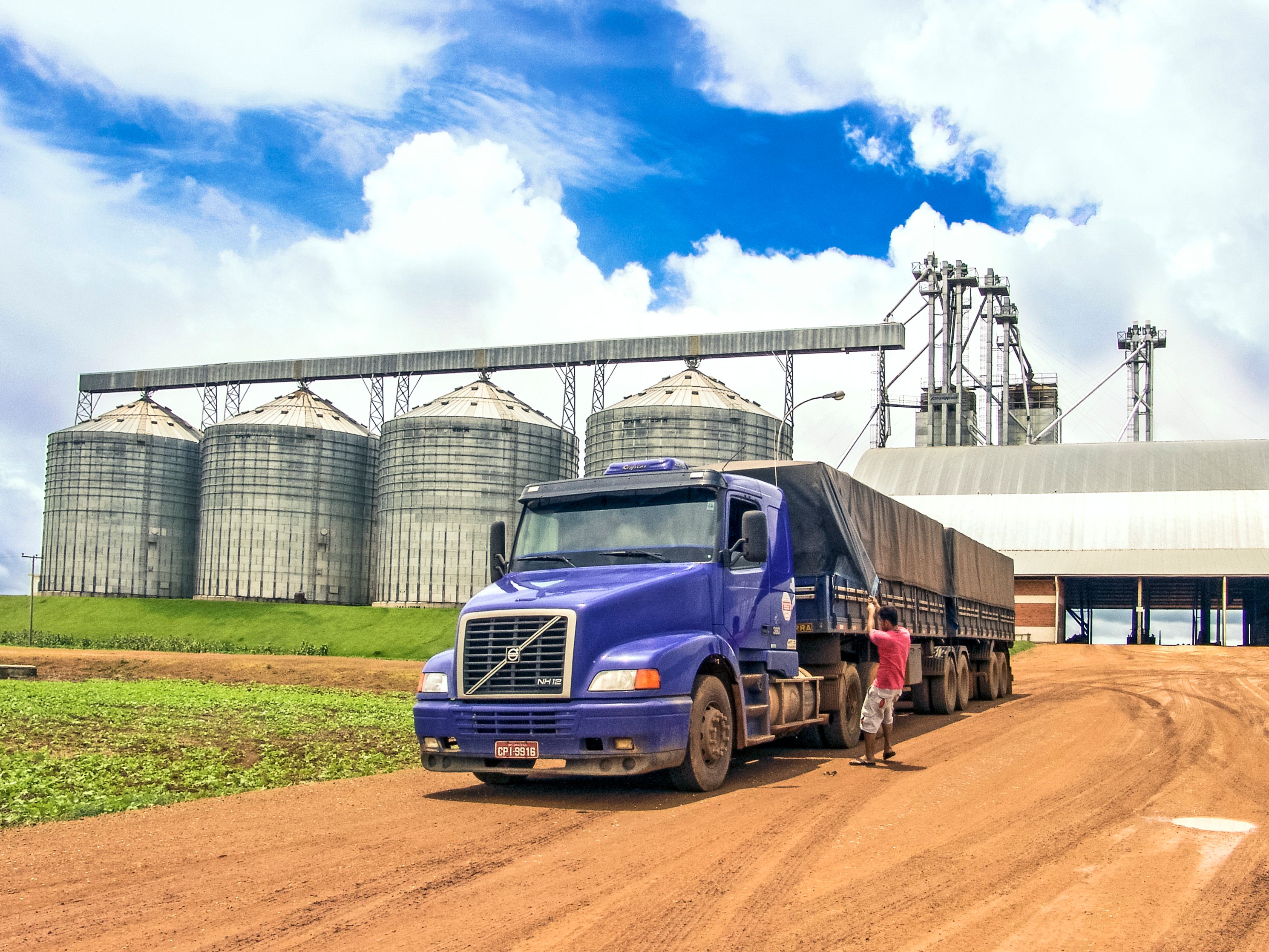 Companies in Germany will be better able to prepare for EU ‘due diligence’ legislation on deforestation-free supply chains due to Trase analysis that highlights hotspots of risk.

Germany is linked to 58,500 hectares of tropical deforestation – an area two-thirds the size of Berlin – as a result of its direct imports of commodities such as soy and palm oil in 2016-2018, according to new research by Trase for Germany’s development agency (GIZ) and Federal Ministry of Economic Cooperation and Development (BMZ).

This exposure more than doubles to 138,000 ha if Germany’s total consumption of manufactured products linked to deforestation is included. Soy, for example, is used to feed cattle which are raised to make leather to upholster cars produced by the German automotive industry.

Trase was commissioned by GIZ on behalf of BMZ to assess Germany’s deforestation risk exposure to support action to achieve deforestation-free supply chains. These measures are needed if Germany is to meet international commitments such as the Amsterdam Declarations Partnership (ADP) and prepare for emerging EU legislation through the proposed regulation on deforestation-free products .

Preparing for due diligence

Speaking at a webinar to discuss the research, Lisa Kirfel-Rühle, deputy head of sustainable agricultural value chains at BMZ, said Trase’s analysis was extremely helpful in supporting the case for the proposed EU ‘due diligence’ legislation on deforestation-free products by providing evidence on the links between specific commodities and deforestation risk. She hoped that other EU member states would conduct similar studies to understand their exposure.

Katja Albrecht from GIZ’s sustainable agricultural supply chains initiative said Trase’s analysis would contribute to risk assessments that importers in Germany will have to carry out as part of their due diligence requirements and inform ongoing dialogue with producer countries.

Trase used three approaches to assess Germany’s deforestation exposure . The first and simplest way estimates deforestation risk from commodities that are directly imported by Germany from producer countries. The second ‘re-export-adjusted’ approach includes commodities that are imported indirectly by Germany via intermediaries such as the Netherlands, as well as commodities processed in Germany and re-exported to other countries.

The third and most comprehensive approach uses a combination of trade data and financial modelling to link deforestation to the consumption of manufactured products along Germany’s entire supply chain. This shows that Germany has the largest exposure to deforestation compared to the other eight ADP signatories including France, Italy and the UK. The direct import approach highlights the role of the Netherlands as the EU’s main commodity importer, but much of this is re-exported to other countries.

The deforestation exposure of all ADP countries is eclipsed by China, which is not a signatory. However, Germany’s deforestation risk intensity (risk per tonne of commodity use) is higher than China’s and about equal to the UK’s from a consumption-based perspective (see figure). 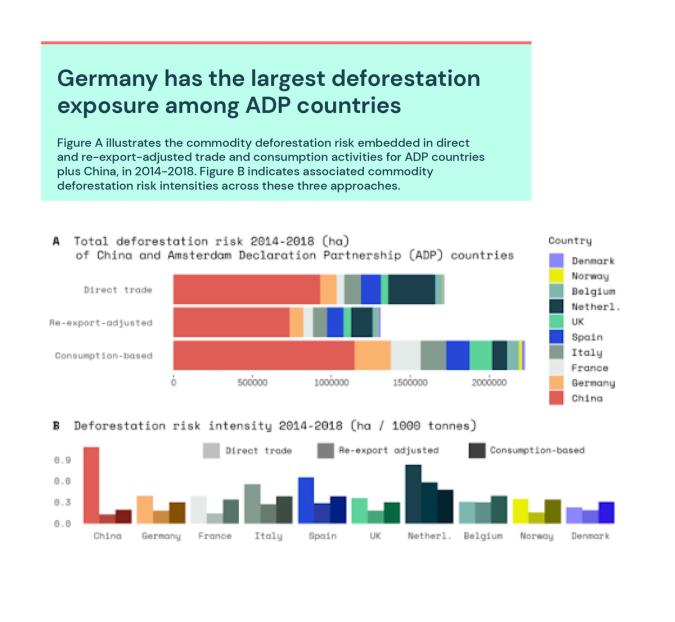 Presenting the key findings, Trase’s Chris West, deputy director of the Stockholm Environment Institute York, said that comparing the three approaches shows that deforestation embedded in processed products is an important source of risk for Germany and other developed economies which are heavily dependent on imported materials that are processed overseas. This underlines the need for countries to work together so that commodities linked to deforestation do not shift to other consumer markets with lower standards of environmental protection.

Commodities and countries of concern

While Germany’s deforestation exposure appears to have declined from the direct import and re-export-adjusted perspectives, the consumption-based results show that Germany’s exposure has remained constant, and has increased for some commodities such as beef.

Trase’s analysis reveals the commodities that carry the most deforestation risk for Germany’s supply chains. In the direct and re-export approaches, soy and palm oil are clearly of most significance . In addition, the results highlight coffee, cocoa and cashew nuts as emerging commodities of concern. The consumption-based approach emphasises the significance of palm oil and cattle products due to their use in manufactured goods. It highlights maize (corn), rice and cassava as commodities of concern (see figure). 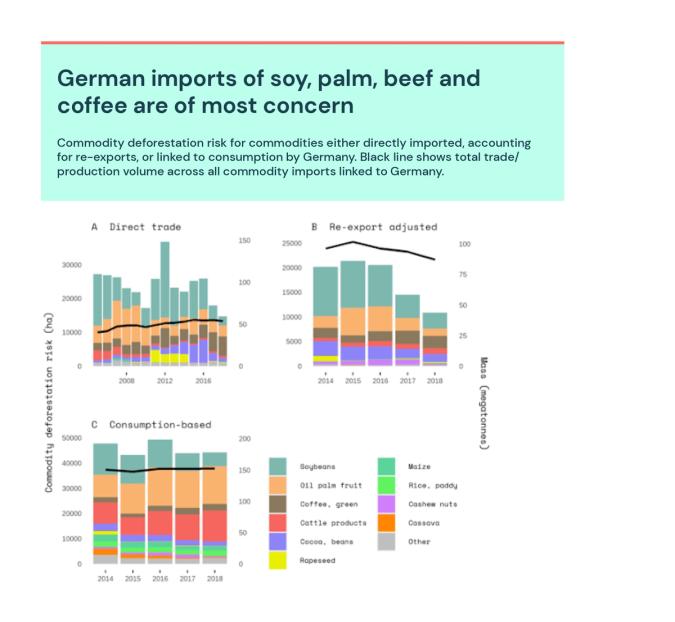 Trase’s analysis shows that Brazil, Indonesia and Paraguay are the producer countries which are associated with most deforestation risk for Germany due to their exports of soy, beef and palm oil. More unexpectedly, it highlights Colombia as an important source of deforestation risk from its exports of coffee and Côte d’Ivoire through its cocoa exports (see figure). 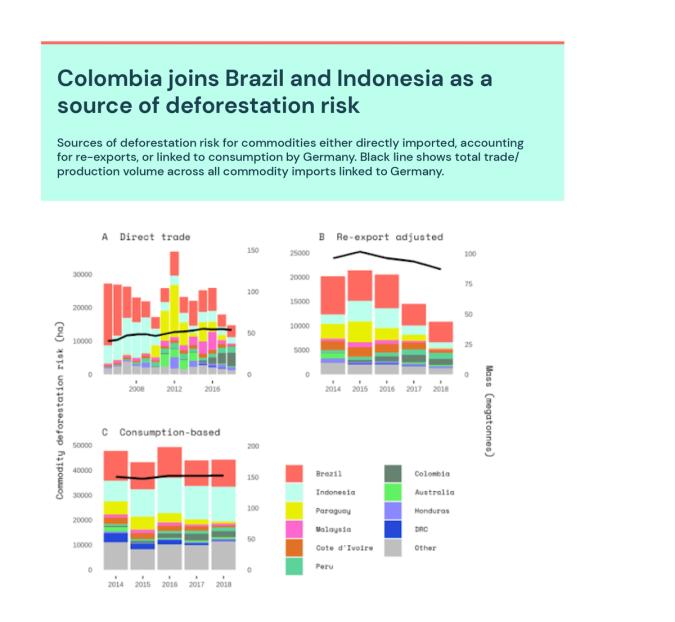