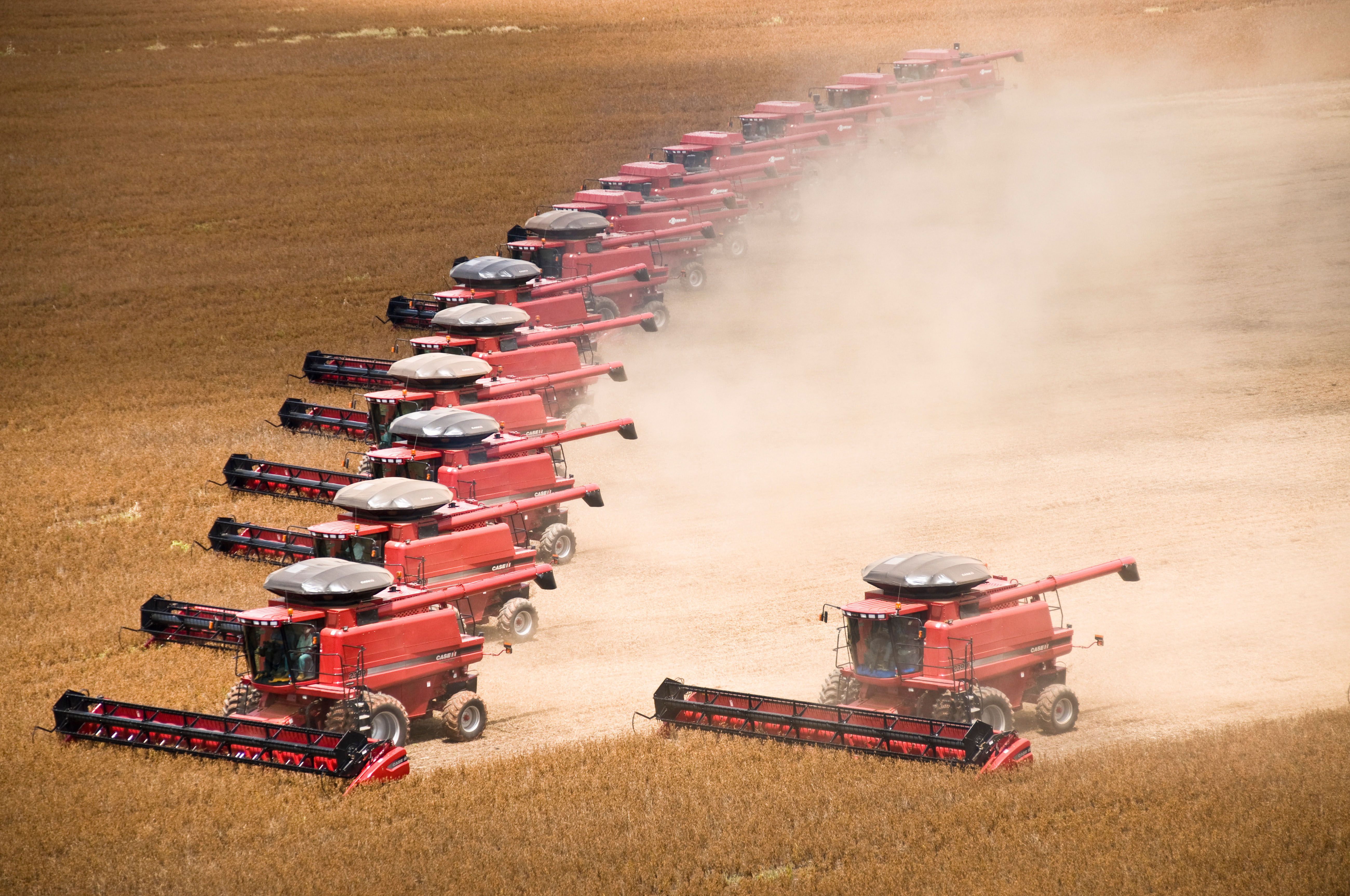 A new Trase study finds that Germany is exposed to deforestation risk from Brazilian soy embedded in processed products and imported through intermediary countries.

By Chris West and Mark Titley

Soy is one of the largest sources of commodity deforestation risk for Germany. Globally, soy production has expanded dramatically over the past 50 years, and has more than doubled since 2000 ( UN FAO ), mostly for animal feed. Although crop yields are improving, much of the increase in production has occurred through the expansion of cropland, some of which has come at the expense of tropical forests.

This work is part of a broader Trase study commissioned by Germany's development agency (GIZ), on behalf of the Federal Ministry of Economic Cooperation and Development (BMZ), to assess Germany’s association with tropical and subtropical deforestation via its consumption of imported agricultural commodities.

The study combined information on global and regional deforestation with trade and consumption data to provide an overview of the scope and nature of Germany’s exposure to deforestation in supply chain activities.

The findings of the study are detailed in a dedicated project report .

A key challenge is that the globalised supply chains linking the production of agricultural commodities to consumption are complex, and Germany's exposure to deforestation risk can be viewed from several different perspectives.

On the one hand, we can simply explore the deforestation risk from agricultural products that are directly imported from tropical countries. This 'direct trade' perspective provides a useful overview of how trade activities might be linked to production and associated environmental risk, but gives an incomplete picture.

One reason is that the initial destination for exported products may only be an interim step in supply chains, with a country like Germany 're-exporting' some commodities to other countries, or importing deforestation risk via intermediary countries like the Netherlands. We can therefore take a 're-export adjusted' perspective to take these extra steps into account.

But, to complicate things further, there may be additional trade, processing and use of materials by other industries in the world's economy, passing on deforestation risk indirectly through highly processed products and through economic sectors that, at first glance, might seem far-removed from the production of deforestation-risk commodities. A 'consumption-based approach' can be used to capture these more indirect flows of deforestation risk around the world.

In the study for GIZ, we have therefore presented Germany's deforestation risk from these three complementary perspectives: direct trade, re-export adjusted, and consumption based. These three approaches provide different viewpoints on the responsibility of countries for deforestation linked to commodity production, and are summarised in more detail in a dedicated explainer.

Germany's risk compared to other countries will vary between these three perspectives according to its position in supply chains and role within the global economy. The interactive visualisation below illustrates this. It shows the total deforestation risk and accompanying material volumes associated with countries importing Brazilian soy products, with Germany represented by the grey bubble.

This shows that, while directly imported risk is important, a significant portion of Germany's soy deforestation risk from Brazil comes via more indirect routes – perhaps soy products imported through 'intermediary' countries like the Netherlands, or in the form of soy deforestation risk embedded in more complex supply chains – such as Brazilian soy used as animal feed linked to the production of leather for the German market.

Germany's results contrast starkly with the results for China. Although China consumes a very large amount of Brazilian soy, its demand for (and deforestation risk from) soy is greatest when seen from a direct trade perspective. This reflects the important role that China plays as a global manufacturing and trade hub. Although China directly imports significant amounts of material, not all of this is linked to consumption within China itself; rather purchases of Chinese products by other countries 'redistribute' this risk downstream. The relative position of Germany compared to other countries also reflects these patterns. Considering the 35 countries that have comparable data from all three approaches, Germany ranks third in terms of deforestation risk from the consumption-based perspective, fourth from a re-export-adjusted perspective, and sixth from a direct trade perspective. Germany's particularly high ranking from a consumption-based perspective underscores the importance of its role as a consumer of Brazilian soy in more embedded and indirect forms. Other countries, such as the USA, have even more dramatic differences in ranking between the three perspectives.

Taking re-export activities into account is important because Germany may inadvertently import tropical deforestation risk through other countries, or act itself as a re-exporter of risk to other countries. Overlooking these more indirect trade pathways could undermine efforts to improve supply chain sustainability for Germany and its trade partners.

Our methods to factor in re-export activities enable us to highlight these potential indirect sources of deforestation risk. Since we lack traceability information that would allow accurate tracking of these re-export activities, we use modelling approaches based on import and export records to estimate which countries are likely to be important 'intermediaries'.

In the interactive visualisation below we explore the role of Germany as both an importer, dependent on intermediary countries for its supply of soy, and as an origin of soy material in the trade pathways of countries downstream.

The visualisation reveals how almost half of the Brazilian soybeans destined for Germany are imported via the Netherlands. We can see how the Netherlands acts as a major re-exporter of soybeans, and, because of its soy crushing industry, a major 'source' of soybean oil and cake that are then exported to Germany. Germany, too, plays a role as a re-exporter, in particular for soybean cake (which is mainly used for animal feed) destined for other European countries such as Denmark and Czechia.

Hotspots of risk at subnational scale in Brazil

The assessment presented above is based on national scale analysis of global trade relationships. However, for selected countries and commodities, Trase has access to much more granular, subnational, supply chain mapping information. The methods involved to associate deforestation risk to this detailed supply chain mapping differ from those used in the national scale analyses. This means that absolute deforestation risk numbers are not directly comparable to the global analysis, but Trase provides more detail on the specific locations of deforestation risk within producer countries. The visualisation below explores the spatial distribution of deforestation risk in Brazil for soy imported by Germany between 2016-2018. Direct trade results are shown by default in the visualisation, but imports adjusted to account for re-exports are also available. The map reveals a striking picture for Germany's soy deforestation risk; most risk is isolated in only a handful of municipalities, in particular Formosa do Rio Preto in the Matopiba region.

Nonetheless, the most important municipalities from the perspective of soy deforestation risk remain similar across both direct and re-export adjusted pictures, providing evidence that Germany can work in conjunction with intermediary partners in its supply chain to explore the potential for sustainable production interventions in key shared production frontiers.

The full report that underpins this insight is available here . To our knowledge, this is the most comprehensive analysis of Germany's commodity deforestation risk exposure conducted to date, and is intended to identify 'hotspots' of risk across the global commodity system. The methods involved in the preparation of the report and this insight are complex, so those interested to learn more should refer to the report and our explainers for greater detail.

Importantly, these methods continue to develop and, while rapidly advancing, our knowledge of commodity deforestation linked to consumption systems is still incomplete due to the lack of transparency in supply chains and the dependency on modelling-based approaches to make links across international trade systems. As a result, the numbers presented in the report and this insight are intended to be used as a guide to Germany's risk exposure, with further analysis required to investigate hotspots of risk and understand the dynamics of production and deforestation in more detail.